Review and Photos by Max Stewart

Steve Winwood reminds me of that guy who excels at everything, yet somehow maintains a level-headed likeability. He is the star athlete, 4.0 GPA student that went to your high school and was friends with everybody. He ate lunch with the outcasts but was also the coolest guy at the party, without trying to be. Winwood just seems to have a warm and humble sensibility that folks from varying circles all tend to gravitate towards. Oh yeah, that and he is a Grammy Award winning multi-instrumentalist with an effortlessly soulful voice (Rolling Stone ranked him as #33 Greatest Singer of All Time). After decades of praise and accolades, Winwood somehow manages to avoid the veneer of inaccessibility that is associated with many renowned musicians of his caliber.

Why do we all want to be friends with Steve Winwood? For one, he has always forged his own unique career path without causing a media frenzy or self-righteous fuss. After a prosperous career in the Rock and Roll Hall of Fame-inducted, Prog-Psych band Traffic, he submerged himself into the world of Pop Rock. In doing so, he managed to churn out infectious classics that include “Higher Love”, “Roll With It”, “While You See A Chance”, and “Back In the High Life”. Everything he released during the Eighties has aged well and stands up today, unlike a lot of the neon-covered, hair-sprayed anthems of that decade. Sure, Winwood could have ridden the coattails of his success in the Sixties and Seventies and elected to release obscure, bloated solo records in the aftermath of Traffic’s breakup, but instead he wrote some of the most catchy, Blue-Eyed Soul Pop songs of that era. Again, he appeals to everyone. From the introspective trombone player in the school band who’s favorite album is Traffic’s cosmic Mr. Fantasy, to the good-timing point guard on the basketball team who can’t get enough of the song “Valerie”, everybody at school likes Steve Winwood.

When Winwood picked up his mandolin and lead an extended intro of the 1986 hit “Back in the High Life” to start things off at the Warner Theater in D.C., the sold-out crowd was immediately hooked and captivated. Sometimes when you see the iconic musicians of Rock ‘N’ Roll perform, their voices are a thin shadow of what they used to be and the shows feel soulless and uninspired.  That was certainly not the case on this Monday night, and it is clear that Winwood’s signature tenor vocals have not lost their edge. Winwood sat behind the Hammond B-3 organ to turn the clocks back to 1968 on the psychedelic, “Pearly Queen”, off of Traffic’s self-titled album (he would bounce back and forth between organ and guitar for the remainder of the night). Winwood’s impressive band includes Guitarist Jose Neto, Drummer Richard Bailey, Percussionist Edwin Sanz, and Multi-Instrumentalist Paul Booth, all of whom clearly enjoy sharing the stage with rock royalty as smiles were abound throughout the show.

Music has always been part of the Winwood’s life: at an early age the English musician backed the likes of Muddy Waters, B.B. King, and Chuck Berry as they toured Birmingham, England clubs before he joined the blues outfit Spencer Davis Group at 15 years old. The organ-heavy intro for the Spencer Davis Group’s “I’m a Man” was an impressive improvisational section, proving that Winwood still has the musical chops to cut loose at 68. Sanz and Bailey led the percussion segue into the worldly, downtempo ballad, “Fly” – off of 2008’s Nine Lives – which was the most recently-released song performed. The funkiest moment of the night occurred when Winwood covered drummer Buddy Miles’ “Them Changes” (who was in Jimi Hendrix’s Band of Gypsys).  This was a touching addition specifically because the night before Miles died in 2008, a friend called him and held up his cell phone so he could hear as Eric Clapton and Steve Winwood were covering the song at Madison Square Garden.

“Can’t Find My Way Home” and “Had to Cry Today” from Winwood’s time in the short-lived supergroup Blind Faith (with Eric Clapton, Ginger Baker, and Ric Grech) both felt right at home amongst a diverse song selection, and they were opportunities to showcase Winwood’s underrated guitar propensity. The latter half of the set included three well-executed Traffic pieces: the Prog-Jazz Rock gem “The Low Spark of High Heeled Boys”, the undeniably hooky “Empty Pages”, and the jam-centric “Light Up or Leave Me Alone”.

Winwood’s tour is a bit of a family affair, it turns out. I chatted briefly with his son Cal who was running the merch booth, and his daughter Lilly Winwood opened the show with a strong repertoire of acoustic material. How cool is it that he can bring his kids on tour with him? You win again, Steve. Lilly returned to the stage for some vocal harmony assistance on the crowd favorite, “Higher Love”, before he graciously waved and acknowledged members of the audience and made his way backstage to end the main set.

The encore included two of the most rousing performances of the evening, Traffic’s timeless “Dear Mr. Fantasy” and the Spencer Davis Group’s R&B groove “Gimme Some Lovin’” (which also included Lilly on vocals). The Warner Theater might was well have been a high school pep rally at this point, with everyone on their feet and Winwood leading the celebration. Rebels, jocks, stoners, nerds, preps, and even the teachers all collectively rejoiced and danced in the aisles of the 1,800 capacity theatre to wrap up the joyous night of music.

It is truly remarkable what Winwood has managed to do in his legendary career, organically bringing together eccentric Rock and upbeat R&B Pop while achieving success in both musical endeavors. Although his catalog of varying musical undertakings may seem worlds apart stylistically, they feel harmoniously cohesive live. Maybe you will be so lucky that Winwood will choose to sit at your table in the cafeteria at lunch (or more likely, perform at your local theatre or arena), and if he does, make sure you take the opportunity to see the culmination of his comprehensive musical affinities on full display. 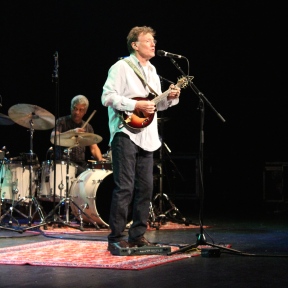 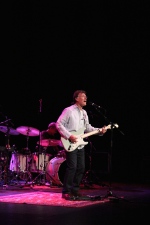 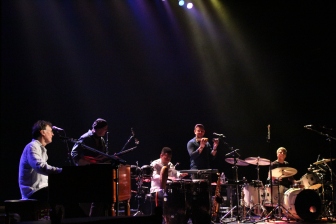 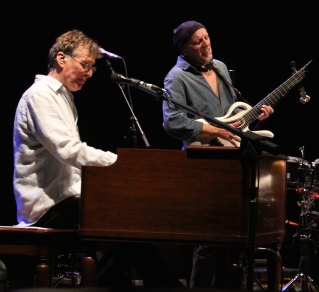 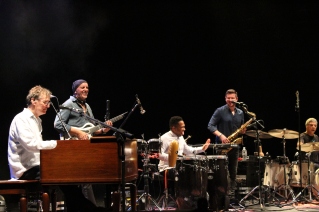 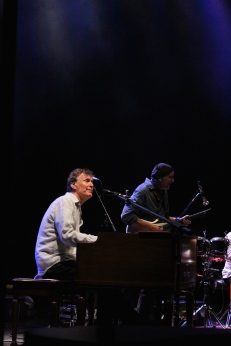 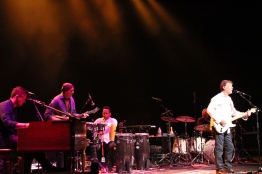 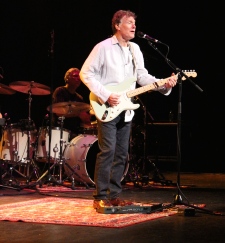 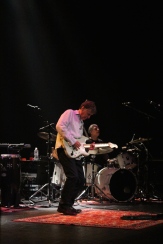 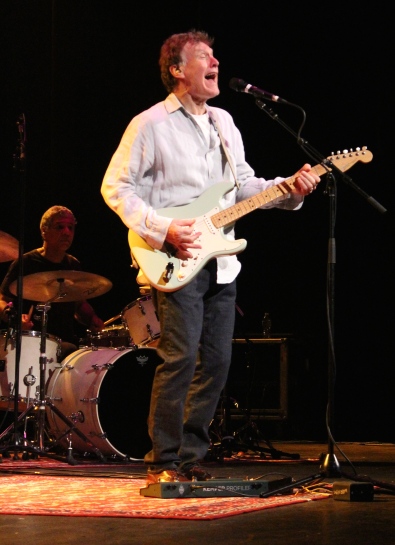 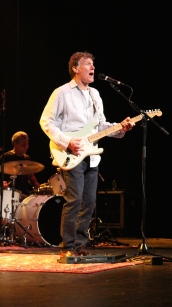 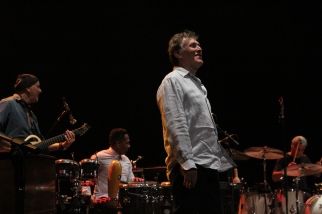 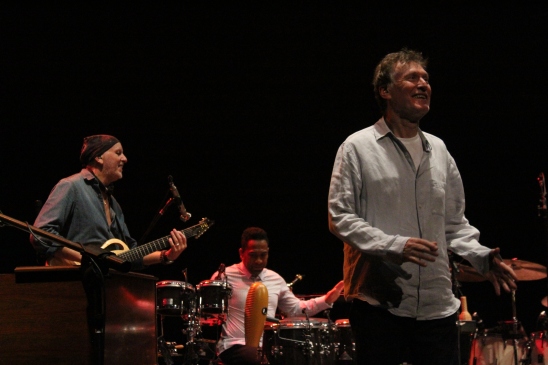 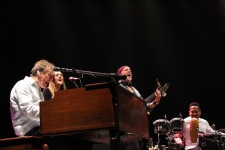 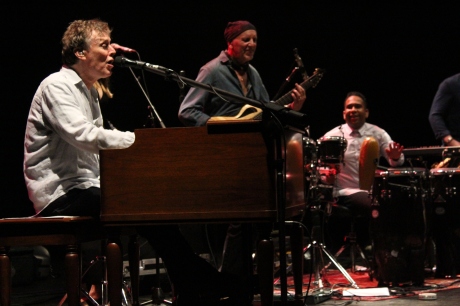 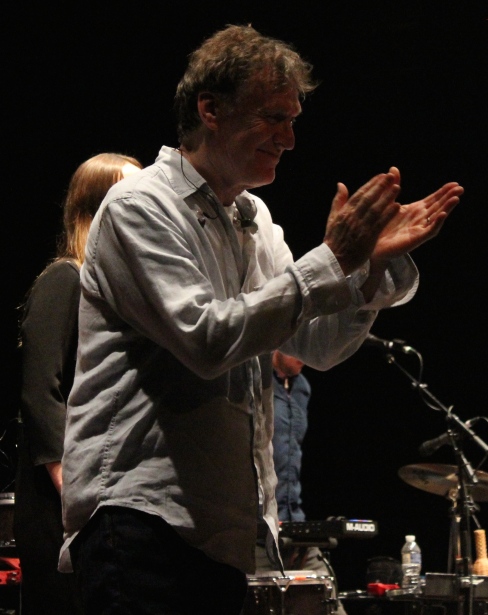 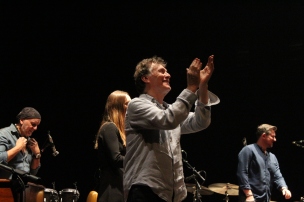 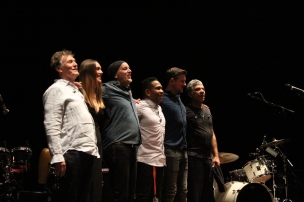