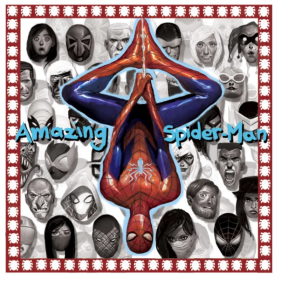 If you’ve read every week of this series, you’ll no doubt notice a trend in the comics I chose. These are some of Marvel’s most popular and critically-acclaimed series, but yes, they also have in common diverse protagonists. Make no mistake: Marvel still has lots and lots of white male characters. Yet still, in the letters to the editor section of Marvel titles, right next to the messages from little Muslim girls who are stoked to see that Kamala is in the Avengers, are letters from long time readers accusing Marvel of having a politically correct agenda.

The responses from the editor always say more or less the same thing: they are simply trying to reflect their readership. Marvel’s only agenda is capitalism. How many times can they reboot the Spider-Man films with white actors before the public gets bored? Queue the Miles Morales animated movie (2018), helmed by Phil Lord and Chris Miller of The Lego Movie (no word yet whether Donald Glover, who ended up voicing Morales in the Ultimate Spider-Man TV show, will reprise the role he helped create).

Marvel’s business is, and has always been, inspiration. The idea for a black Spider-Man began, according to Marvel editor-in-chief Axel Alonso, in the months before Barack Obama’s election: “We were standing at the brink of America electing its first African-American president and we acknowledged that maybe it was time to take a good look at one of our icons.” They were not trying to push diversity, but simply reflect it.

In one of Miles’ early issues, a video of him as Spider-Man goes viral. A vlogger notices Miles’ skin through a tear in his costume. Miles, his best friend Ganke, and the readers watch the vloggerdance with joy, but Miles is not thrilled by the reaction. “I don’t want that,” he says, “the qualification…I don’t want to be the black Spider-Man. I want to be Spider-Man.” Lunella Lafeyette’s race has not been mentioned once in the issues I have read. Kamala’s ethnic and religious identity is front and center, but only in her personal life and not because she wants it to be. This is, unfortunately, just a reflection of being a Muslim in America.

Perhaps Marvel does feel an obligation to be socially conscious. Artists of every medium are faced with this dilemma. After all, with great power comes great responsibility. In the debut of a new series, Champions, Kamala, Miles and other young heroes foil a sex trafficking scheme in Baltimore. Ms. Marvel stops a fellow hero from killing the perpetrator with an inspirational speech that advocates for the world’s youth to fight with wisdom, rather than force. Someone films the speech, and, of course, it goes viral in seconds. We see our young heroes staring at their phones, as bubbles with “#Champions” pop up, saying things like “About time,” “Where do I sign?” and “Finally Woke.” Marvel’s obligation is not to a socially conscious agenda; it’s to their readers, who just happen to be hopeful, spirited, and diverse in a multitude of ways. Despite dealing with space aliens, super-powers, and time-traveling dinosaurs, Marvel operates by Andre 3000’s creed: Tell it like it is, then how it could be.