On February 11th, 2016, Kanye West debuted The Life of Pablo at Madison Square Garden. At that point, the album ended with Frank Ocean’s outro on “Wolves.” As soon as that track ended, West cracked a smile and said into the microphone, “Didn’t I tell y’all I’d deliver on the album?” This might not be the quote verbatim, but it’s what went through my head as I read the final panel of The Mighty Captain Marvel. Kanye is the reason I got into rap. He is maybe my favorite living artist in any medium. So, as my obsession with the Marvel Hip Hop variants grew, so did my frustration that there had not been a Kanye cover. Look, I get it- there isn’t a teddy bear superhero. But why not have a mutant flying out of the X-Mansion a la Takashi Murakami’s Graduation? Why not have Black Widow as the ballerina from the cover of My Beautiful Dark Twisted Fantasy? 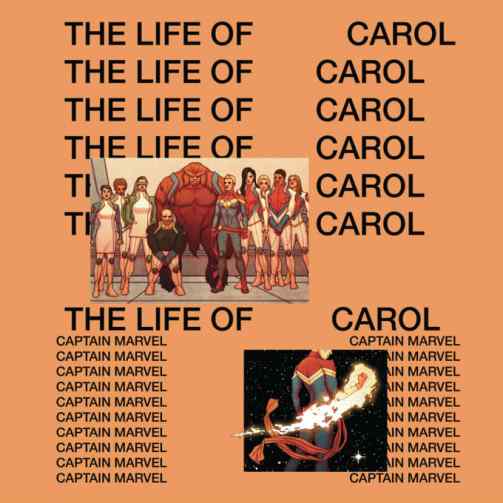 I was thrilled to see Carol Danvers on the cover of Pablo, and boy did the issue deliver. Danvers was introduced into the Marvel Universe in the late 1960’s, and since then she’s had numerous monikers: Ms. Marvel, Binary, Warbird, and today, Captain Marvel. She’s part human, part Kree (a technologically advanced alien race which, like Carol, has been prevalent in Marvel since the 60’s). Her unique physiology gives her super strength, speed, stamina, and durability. Oh, and she can fly and also shoot energy from her fists. Currently, she’s the head of Alpha Flight- Earth’s “premier space agency” (they keep us safe from the countless intergalactic baddies who for some reason are always trying to conquer/destroy Earth).

The Mighty Captain Marvel begins with Carol furious over the fact that the fictional TV show about her is exclusively concerned with her love life and cleavage. She’s then called into action when it appears Army Rangers are taking hostages in an alien refugee camp. The Rangers turn out to be shape-shifting bounty hunters (of course) but the incident sparks a discussion between Danvers and some of Earth’s other superheroes- including Captain America and Black Panther- about whether our planet should launch an atmospheric shield to keep an approaching alien army from waging war against us. Danvers argues against the shield, saying it would keep us safe but only at the cost of excluding displaced alien refugees. Sound familiar? Things come full circle when Captain America reminds Carol that the exploitive TV show she hates is generating the funds to keep the refugee program going. Didn’t I tell y’all Marvel delivered on the issue? 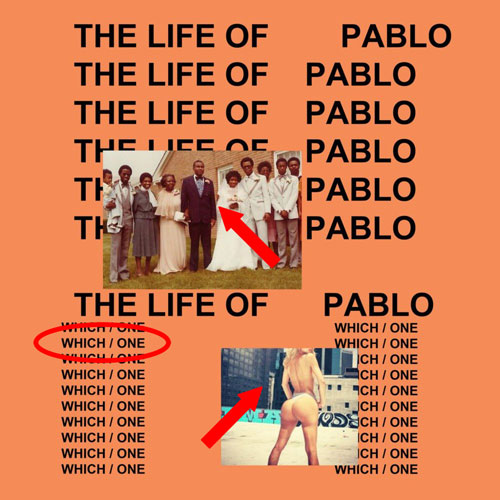 Unlike my previous installments, I am not going to try to draw comparisons between Captain Marvel and Captain Cuckoo (also known as Kanye West). As I’ve mentioned, I love Kanye’s music, but his persona at this point could not be more different from the valiant Carol Danvers. He is a mad titan, who would devour galaxies if it meant having the means to make his new line of clothing. If I may switch into the DC universe for a moment (heresy!), Kanye is the epitome of the line from The Dark Knight: “you either die the hero, or live long enough to see yourself become the villain.”

While The Life of Pablo has quickly become one of my favorite albums (if you consider it over after Frank’s outro), it is rife with the kind of misogyny that Carol, myself, and any other decent human being loathes. Thus, the brilliance of this variant is not in drawing comparisons. It is not even in merely drawing contrast. On the cover, Carol has her fist clenched a la Rosie the Riveter. Whereas on the cover of Pablo we see a model’s bare backside, here we have Carol’s fist, surrounded in cosmic energy, covering up her clothed derrière. The image speaks of power, of pride, and of reclamation.

The average American does not read comic books. They are however most likely familiar with Marvel, probably because of the movies. I have friends like this tell me they are tired of super-hero movies. Perhaps this is in part due to the monotony of the protagonists’ race and gender. Excluding the outdated and atrocious films Elektra and Catwoman, there has yet to be a female protagonist in arguably the most prevalent and profitable movie genre of this century. DC will be the first to break this trend (heresy!) with the upcoming Wonder Woman. Marvel will follow suit in 2019 with Brie Larson portraying Carol Danvers in Captain Marvel. Though two years is a long time to wait, I have no doubt they will deliver (until then, check out Jessica Jones on Netflix!).

Next week: The Grand Conclusion!