There really are certain moments in a music fan’s life that reignite your passion and make you feel like you are a kid hearing a defining song again for the first time. For me, last year’s Record Store Day in Seattle felt like one of those moments. As a background, Record Store Day is an annual event founded in 2007 that seeks to “celebrate and spread the word about the unique culture surrounding nearly 1400 independently owned record stores in the US.” There are a variety of records pressed specifically for Record Store Day, which are only distributed to shops participating in the event. The event not only shines a light on the value of local record stores, but it also takes advantage of the resurgence of vinyl in recent years. With the amount of limited presses comes a lot of early-riser, die-hards who get in line early Saturday morning to buy the releases before they sell out (as well as a few leeches who immediately put the pressings on eBay). In fact, this year’s Record Store Day is tomorrow, April 16th, so get out there and support your local record store!

I just happened to be in Seattle for work obligations for a few days last year and figured I would make the most of being in a city with such rich musical history (Jimi Hendrix, Nirvana, Pearl Jam, Heart, Soundgarden, Death Cab for Cutie, Fleet Foxes, the list goes on…) by visiting a few local record stores. I am an avid vinyl collector and ended up visiting some highly recommended stores in the Seattle area including Sonic Boom Records, Bop Street Records, Jive Time, and Everyday Music.

On the night of Record Store Day after all the dust of the day had settled and the collectors had gotten their merchandise, I was able to score a ticket for an event that benefitted local public radio station KEXP. The RSD event was to be held at Easy Street Records in West Seattle in which legendary Tacoma, Washington band The Sonics were going to perform. For those unfamiliar, The Sonics are a garage punk band that many consider the “the first punk/grunge band” due to their unhinged and raw sound (although they did not make much of a splash in the mainstream music world.) That being said, the band had a far-reaching impact on the music world with influences that include Nirvana, Bruce Springsteen, the White Stripes, and the Cramps and Eagles of Death Metal. In fact Jack White once called The Sonics “the epitome of ’60s punk”. 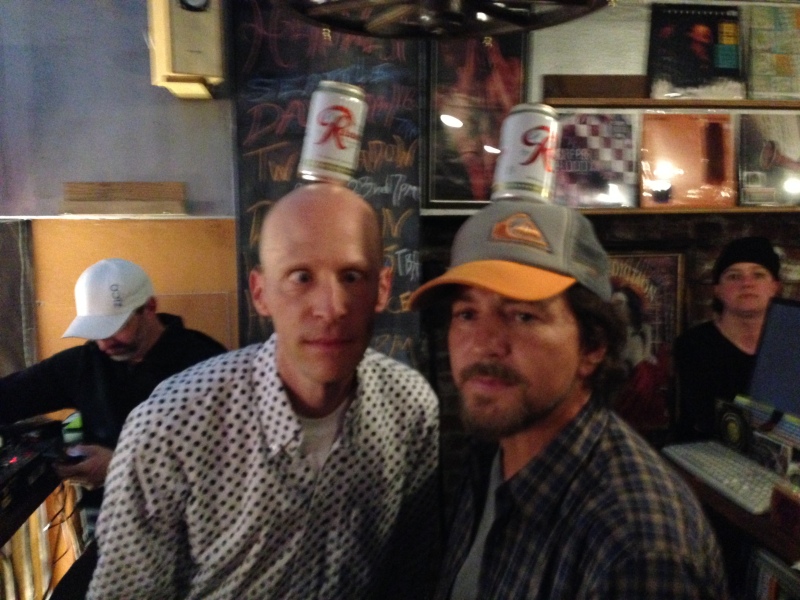 Since the event was billed as The Sonics featuring “Very Special Guests,” I figured we might get a household name or two sitting in with the band. Boy, was I wrong. I started to get pretty giddy when the concert began and Sonics saxophone player Rob Lind proclaimed that “a lot of really important Pacific Northwest talent [was] going to come up here.” Over the course of the evening, The Sonics ended up performing alongside a who’s who of the Seattle music scene: Eddie Vedder and Mike McCready of Pearl Jam, Chris Ballew of Presidents of the United States of America, Matt Lukin of Mudhoney / Melvins, Ben Shepherd of Soundgarden, Van Conner / Mark Pickerel of Screaming Trees, and retired original Sonics member Andy Parypa just to name a few.

You could feel the energy in the room as the Sonics worked through a two hour set to a crowd of faithful fans. The performance itself surpassed my expectations and the Sonics did not miss a beat as they worked their way through songs such as “Boss Hoss,” “Have Love Will Travel,” and “The Witch” (which closed the set with Ben Shepherd of Soundgarden and Mark Pickerel of Screaming Trees). Eddie Vedder performed with the band on the Motown hit “Leaving Here,” off their 2015 release, This is the Sonics. At that point, the owners of the store made the decision to open the garage bay doors so that fans that did not have a ticket could also hear the action, which was a true testament to the communal vibe of the Seattle music scene. According to Vedder, getting to sit in with the band was an “unexpected privilege.”

Watch the entirety of the performance here. You can catch me in few of the crowd shots rocking out, specifically when Chris Ballew came out during The Sonic’s “You Got Your Head On Backwards”.

The concert was such a success, the live performance will be released on Record Store Day 2016 this year!

After the show, the Easy Street Records President Matt Vaughan announced that the party was not over, letting the crowd know: “Everyone should hang out! We are still open!” Of course, I obliged and proceeded to browse the upstairs vinyl collection with a Rainier Beer in tow. It was completely surreal to see legends of the Seattle music scene including Eddie Vedder, Mike McCready, Ben Shepherd, and Chris Ballew all shooting the breeze out with one another and fans alike. I grew up massively influenced by the alternative rock scene of the 1990’s, in great part due to the Seattle “grunge” sound of bands such as Pearl Jam, Soundgarden, Alice in Chains, Presidents of the United States of America and Mudhoney, so this was a complete trip for me.

Over the latter part of the evening, I got to chat with Mike McCready about guitar set-ups, Jane’s Addiction albums, and our mutual appreciation for the city of Baltimore amongst other things. I also spoke to Chris Ballew of the Presidents of the United States of America about the origins of the song “Dune Buggy,” which he says came from a childhood memory of a spider in the driver seat of a matchbox car. He and Matt Lukin (who clearly had enjoyed a few Rainiers himself) started jokingly wrestling at one point, a moment I couldn’t help but capture a picture of.

At about midnight when I hit the bar for another round, I decided I would buy an extra for Eddie, because why the hell not? Vedder was chatting with Seattle musicians and fans alike and I gave him the beer and said “Hey man, I am a huge fan of what you do. Here’s to you.” Vedder was taken aback and was genuinely grateful and proceeded to engage in friendly conversation with myself and those around us for a few minutes. In fact, the highlight of the evening for me was when Vedder and Ballew had a competition on who could balance a beer on their head the longest amount of time, and Vedder instructed me to get a picture of it (Vedder lost). Throughout the rest of the evening, whenever Vedder saw me he would smile and laugh, “Thanks for the beer, man”. It was completely surreal to me. One of my musical idols was not only acknowledging me, but thanking ME?!?

I was up until the late night hours yucking it up with fans and local musicians in the Seattle, and truly felt like I was part of the local scene for that night. I witnessed the community of a local music scene that welcomed me with open arms, and I will never forget Record Store Day 2015 in Seattle. Head out to Record Store Day 2016, no telling what will happen!

Be sure to catch The Sonics on tour this spring, with a 5/7 appearance at the 9:30 Club.