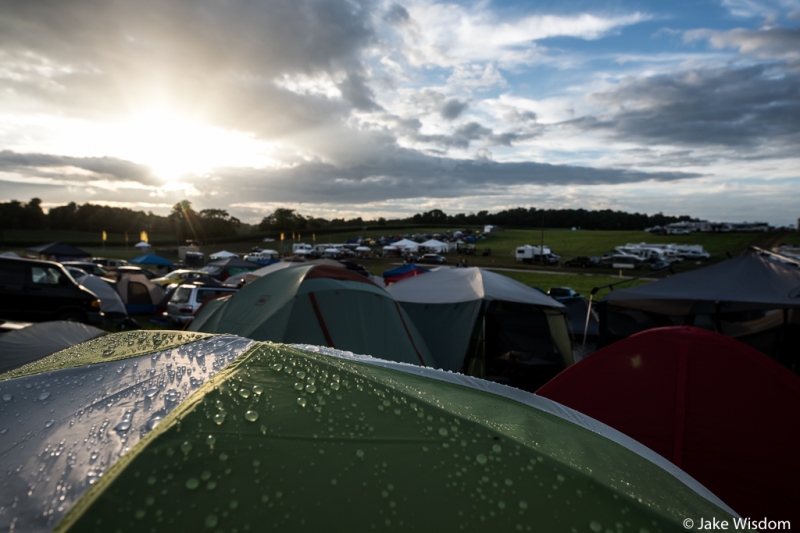 After taking a year off, All Good Music Festival moved back to its home state of West Virginia for its 18th installment, featuring an all-star lineup of jam, funk, rock, reggae and electronica bands. Needless to say, the excitement was palpable in the camping areas for all of the awesome music that lay ahead. The headliners for each night were moe., Primus and Cake, respectively, while late night sets included STS9, Greensky Bluegrass, Thievery Corporation, Lettuce, Dark Star Orchestra and Lotus. These sets alone would make the festival worth a visit, but All Good wasn’t done there. More than 30 other great bands were added to fill out this lineup, and the layout of two adjacent stages, featuring NO overlapping sets, supplemented this one of a kind live music experience.

Berryhill Farm is tucked away, deep into the backroads of Summit Point, West Virginia. The gates opened at 11:00 am on Thursday, and even at 12:30 pm when I arrived in the area, cars full of excited All Gooders were already lined up for at least two miles to get in and get their campsites set up. As people began to finish setting up, I found out exactly why the festival is called All Good. Every single person that I met was extremely friendly and accommodating. It felt like home; everyone is there for the same reason, and everything is all good, as long as we have live music and each other.

Up-and-coming jam rockers, Twiddle, kicked things off on the Dragon Stage with an early evening set that included a little bit of a sunshine theme. This motif was very fitting, since the grounds caught quite a bit of rain that afternoon, but just before the music started, it magically cleared, giving way to a radiant sun. Twiddle brings a beautiful type of energy to the stage, working their way through intricate compositions, as well as loose jams, while Mihali’s unique voice rings clear and true. Cabinet took over on the Crane Stage, picking up the pace with a short set of fast-pickin’ bluegrass. While they were only given a 30 minute set (never fear; they were allotted a full hour set the next day), the band absolutely crushed it! The whole crowd was hootin’, hollerin’ and gettin’ down by the time they finished. Australia’s John Butler Trio came up next, bringing more positive vibes as the sun began to set and the light show began to pick up. For almost 20 years, John Butler’s music has brought messages of hope and touched the lives of thousands of people, and he is still rocking stages today. Butler himself is a multi-instrumentalist, introducing all different types of string instruments during this particular set. The Trio followed up their All Good performance with a trip to Madison Square Garden.

Finally, we were given our first dose of funk for the weekend. Who better than Colorado’s finest to groove us into the night? The Motet rocked the Crane Stage, throwing one of the biggest non-headlining dance parties of the weekend! This seven-piece band from Denver sure knows how to get down, and they closed out their set with the classic dance tune “Get Down Tonight” by KC & The Sunshine Band. And then there was moe.! Our first headliner of the weekend on the Dragon Stage brought us two hours of shredding solos, deep jams and straight ahead rock & roll; everything you would expect from the veteran jamband.

Celebrating their 25th anniversary this year, moe. spanned a broad length of their career in this set, bringing out classics from their first two albums (“Dr. Graffenburg,” “Spine of a Dog,” “Brent Black” and “Akimbo”); middle of the road tunes (“Okayalright,” “Wormwood,” “Not Coming Down,” “The Pit” and “The Road”); and a couple of tracks off of their newest album (“Little Miss Cup Half Empty” and “Silver Sun”). Highlights for me included a massive drums and percussion section during “Brent Black” and my favorite tune from the new album, “Silver Sun,” with its mesmerizing, progressive build that results in pure joy. My notes from the set simply said, “moe. rocks. Period.” This band has aged like a fine red wine, honing their songwriting and gelling together beautifully, as if they’re having as much fun as they were 25 years ago.

Greensky Bluegrass was chosen to begin the late night festivities on the Crane Stage, and as much as I love Greensky, I thought the beginning of their set was a little slow going. Coming off the high energy of moe., I was expecting a kick in the butt right from the beginning. They picked it up, however, and ended up digging deep into their signature hypnotic jams. The band has a way of mesmerizing a crowd with a uniquely psychedelic brand of bluegrass. It is great to see the passion they still have for the tunes on their newest album, which dominated this set, but it was also amazing to end with some classics, beginning with their incredible cover of Dire Straits’ “Money For Nothing,” followed by “Broke Mountain Breakdown” > “Atlantic City” > “BMB (Reprise).”

Closing out the first night of All Good was two hours of STS9. Kicking off with a killer “Ramone & Emiglio,” before weaving through “Totem” and “Gobnugget” and beyond, STS9 completely rocked their set, keeping the Thursday crowd entranced and on their feet. This band has reached new heights since the addition of Alaina Rocklin on bass guitar. The entire band seems to be rejuvenated, as they dig deeper and work their way back to the band’s roots. Highlights from STS9’s set included “The Unquestionable Supremacy of Nature” and an interesting cover of Herbie Hancock’s 1983 tune “Rockit,” which was sandwiched in between “Really What?” to end the night. Another nice surprise during STS9’s set was the guest light show from Phish lighting designer Chris Kuroda (aka “CK5”)! Thursday’s All Gooders were certainly rewarded for their first day arrival, as STS9 and CK5 left heads spinning all the way back to the campsites.