As I listened to this album for the first time, I quickly realized that my preconceived notion of what I was expecting would quickly be shattered. I love this project. So while I will certainly remain unbiased in this review, the following article is not about bashing “ye” or diving into commentary on the political and mental health issues that have saturated the subject of Kanye West in the media lately. Ironically, these subjects are integral to the themes of the album as they reflect Kanye’s mindset while he was creating the project. So as I try to analyze this album based on musicality, inevitably these aspects emerge. As you probably know, separating art from artist is difficult, and separating both from cultura context is even more so.

If you want to focus exclusively on Kanye’s recent political and psychological issues, here are 3 of such renown salty publications: the Daily Beast , Slant Magazine, and this segment from Hot 97. This article, however, will not do that.

With just seven songs on this album, it is not surprising that the project comes off a bit incomplete, but I would contend that this is just Kanye’s tacit decision to leave us all wanting more. A number of current rap albums are trending shorter these days XXXTENTACION, Ski Mask the Slump God & Lil Pump put out songs often less than two minutes and albums under 30 minutes. In fact, the album’s brevity functions perfectly with ye’s extremely sharp rap sequences. With much more intricate verse composition than “Life of Pablo” for instance, Kanye tends to express the bars with significantly more verve.

And while “ye” will not go down in rap history as an album known for the presence and complexity of its bars, the existing bars serve their purpose effectively– from hard and aggressive to gently spoken word depending on the context. Accordingly, Kanye’s talking points are well executed and reminiscent of “the old Kanye,” as opposed to the manic ranting we have seen unravel on stage during live performances over the past year.

Indeed, it is very clear that Kanye really devoted himself to creating this album. Of course he had folks helping — particularly the featured artists which are discussed below — but he had far less writers and producers for this album than, say, Kendrick Lamar did on his last album or any of his before. Nevertheless, part of the reason I dig this album is the production. It’s vintage Kanye. Like he did in Pusha T’s Daytona (which we will discuss later in this article), “ye” takes Kanye West back to his earlier production staple of “sample chopping.” Kanye’s dynamic use of sample chopping is clearly present in the album opener “I Thought About Killing You.” In terms of the album composition, structure and production, Kanye fans will likely have the feeling that Ye is somewhat of a hybrid between Late Registration and 808’s & Heartbreak, with glimpses of My Beautiful Dark Twisted Fantasy sprinkled throughout as well.

The driving force behind this record is compositional ambiguity, especially on songs like “All Mine,” which also garners a lot of character from its Young Thug and Jeremih features. It’s Kanye’s individuality and unique creativity that provides the musical continuity & his dynamic delivery conveys a sense of honesty & truthfulness. He does not hold back and certainly does not discriminate his call-outs, e.g. referencing a light-skinned user of ghost writers (presumably Drake, of course) in “No Mistakes” and his explicit line bashing Tristan Thompson in “Yikes.” I also really enjoyed the beats and delivery of most of the songs, many of which are elevated by traditional Kanye style flows. The bass lines are also extremely clean, but I think what makes me love this album most are the features.

By far my favorite feature is Kid Cudi in “Ghost Town.” Having worked extensively with Kanye before, the two are very compatible and in the feature, Cudi adds tremendously to what is essentially an old Kanye sound. Lyrically, “Ghost Town” is all about freedom which is summed up in the line “no hatcheries just naked people mines…”. Regardless of what one thinks of his recent antics, Kanye has proven to be a savant in the studio. And he gives us some of his most impressive work in “ye,” from the rolling guitars that define the John Legend, Kid Cudi and 070 Shake assisted “Ghost Town” to the chopping of Slick Rick’s “Hey Young World” on “No Mistakes.”

My favorite song on the album, however, is the second track, “Yikes.” Somewhat like the album as a whole, “Yikes” is full of provocative but somewhat surface-level lyrics. Kanye expresses both his search for larger truth within celebrity culture, as well as his obsession with fame. This duality manifests in a few flashy name-drops, from Gandhi to Stormy Daniels. On this track, he riddles off a stretch of hilarious but admittedly out-there bars that mention Kim Jong-Un and Wiz Khalifa in the same breath. Later on in the same song, he raps about the recent slew of sexual assault allegations involving Def Jam’s co-founder: “Russell Simmons wanna pray for me too/I’ma pray for him ‘cause he got #MeToo’d.”

Kanye’s wit and ambiguity evoke a paradox for the listener as we are unsure whether he is expressing genuine concern for Simmons in the event he was wrongfully accused or targeted, while at the same time Simmons’ numerous condescending public posts about Kanye’s behavior, politics and mental health, make it equally likely that the line is a jab at Simmons for being a hypocrite.

Another song that really grabbed me is “Violent Crimes.” As noted, Kid Cudi is, in my opinion as well as numerous professional critics, the dominant feature on the album. But he is followed shortly by Charlie Wilson. On “Wouldn’t Leave,” Kanye does come across as a bit defensive. The song opens with PartyNextDoor, who bellows “I don’t feel that she’s mine enough.” The insecurity that is being conveyed leaves the listener floored– and the simple combination of bass, keys, and crooning that follows really takes hold of your soul. Kanye creates the feeling that your floating in a universe solely concerned with espousing thanks– and in this case, Kanye is conveying all thanks to Kim for holding him down when he was broken and never wavering in her love. To further emphasize his point he offers her a hypothetical exit in the verse, wherein he then raps, “she wouldn’t leave.”

That said, while PartyNextDoor admittedly played a role and added a catchy melody, I could not help but be annoyed by his continuing to try and fail to rip off the incomparable vocals of Young Thug. Without question “Wouldn’t Leave” is an awesome track, but it could’ve gone to a whole new level had Kanye been able to get Thugger on “Wouldn’t Leave” in addition to “All Mine.” No one else can melodically deconstruct the language of a verse like Young Thug, and his presence would’ve simply made a great song just about perfect. Unfortunately PartyNextDoor is a cheap imitation of Thugger. His attempt to mimic Thug’s sound may come off as decent to the average fan, but it sounds like nails on a chalkboard to those of us who study and revere the melodic genius of Young Thug’s music.

-“I Thought About Killing You”

Kanye begins the album’s emotional trajectory at his lowest point. It is unclear whether his claim that bipolarity is “my superpower” is supposed to be taken literally or as an example of what he would feel like during his manic episodes. But while mental health is certainly an important theme in this album, the subject of love and family seems to be the underlying takeaway from “ye.” As noted, “Wouldn’t Leave” is apparently Kanye’s dedication to Kim Kardashian, thanking her profoundly for sticking with him through a lot of hard times and nonsense. Indeed Kanye even sounds remorseful at times. The theme of family reappears when the album closes with “Violent Crimes,” suggesting that, for Kanye, having a daughter has manifested in an immediate capacity to humanize all women.

Father forgive me, I’m scared of the karma/‘Cause now I see women as something to nurture/Not something to conquer”

One of the biggest surprises surrounding this album for all Kanye and music fans everywhere came before anyone heard a single track. In total non-Kanye fashion, this album was actually released precisely when it was supposed to. Unlike the majority of past Kanye albums, “ye” came out exact when it was promised to drop. As such, the album drop party in Wyoming was a major social event and was extremely successful by all accounts. 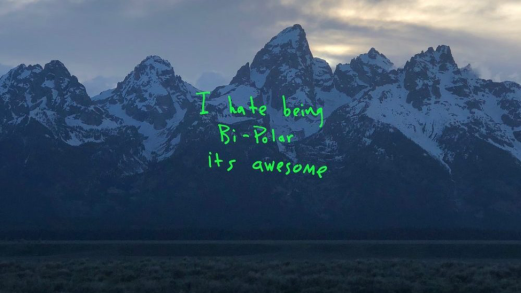 The next significant aspect of the album that also precedes the music itself is the cover art. Much has been made about how the cover for the album was merely a picture taken by Kim Kardashian once they arrived in Wyoming. More importantly, the cover art for “Ye” immediately and emphatically calls Kanye’s mental health to the forefront of the audience’s conscience because of the handwritten message printed directly across the photo, stating, “I hate being Bi-Polar its awesome” (sic).

Another reason that this cover art became such a popular topic of conversation is that, while this particular cover was effectively free to produce, the cover art for the Pusha T’s Daytona album, which Kanye just finished producing, cost a whopping $85,000. Shown below, the cover for Pusha T’s Daytona album is a major point of controversy in itself. In fact singer and former husband to the late Whitney Houston, Bobby Brown, called the cover of Pusha-T’s album – which depicts Whitney Houston’s bathroom counter littered with drugs – “in really bad taste” during an interview with Rolling Stone on Wednesday. He also went on to state that someone needed to “slap Kanye around” for commissioning the photograph.

And while critics are arguing back-and-forth about the implications of this album art drama, the Kanye fan in me would like to simply think that this is a reflection of how much Kanye cares about his friends and peers (I.e going above and beyond to produce for Pusha T the best version of “Daytona” possible) and their success, while simultaneously showing his own confidence in his artistic decision making regardless of monetary value, popular judgment etc.

Check out “ye” for yourself on Spotify by clicking here.