We all know the adage regarding Sunday shows, and last weekend’s concert in Atlanta was certainly not to be missed, but for a completely different set of circumstances. Sure, it was the first time Trey Anastasio has toured with a trio alongside drummer Russ Lawton and bassist Tony Markelis since 1999, and it was one of the smaller rooms Anastasio had played to in Atlanta in many years. The real reason for the Sunday musical congregation, however, was to honor Anastasio’s good friend Chris Cottrell, who passed away this year from adrenal cancer. The concert actually was a benefit for the WaterWheel Cancer Fund, and it was preceded by a memorial service for Anastasio’s late friend with most folks in attendance at the show as well. The tone of the evening was certainly not morose, instead the benefit performance felt genuinely like a celebration of life and a grateful appreciation of the joys within music in all of our lives.

Accordingly, Anastasio kept the vibe lighthearted for the majority of the night, even referencing a Mitch Hedberg joke at one point: “I was gonna ask you guys how you were all doing, but then I refrained,” before looking towards bassist Markelis: “Are you sustaining?” Sustain was the central theme to the night’s event, which is detailed in Anastasio’s earnest tribute to his late friend. For those that have not read it (you should), it seems as though Cottrell supported all things ‘sustain-heavy’ in Anastasio’s musical endeavors in Phish and beyond during their lifetime of friendship: “The way Jimi [Hendrix] always kept the energy flowing like a torrent…like whitewater rafting, how he would sustain, a roaring rapid of sustain.” The trio had no trouble honoring Cottrell’s guitar tonal preferences on April 29th at Terminal West, as Anastasio’s six string notes howled to the high heavens (notably during “Twist” and “Sand.”) 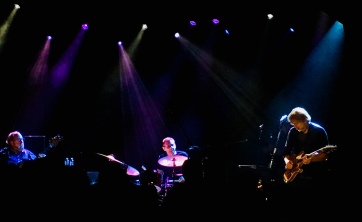 The night began with a staple of the tour, Phish’s “Blaze On,” before the band kicked into some New Orleans-style boogie on “Party Time,” probably still having some of that cajun swing in their step after coming off a two night run in the Big Easy. Anastasio mentioned his and Cottrell’s mutual friend, Mary, as the band launched into a well-received version of “Heavy Things”: “My friend Mary and Chris and I were real close for many years, I’m sending this one out to you with love, cause you were a friend… they say.” On “Everything’s Right,” the chemistry of the trio was totally locked in, with each member complementing the musicianship of the other.

The second set was littered with high-energy jams (“First Tube,” “No Men In No Man’s Land”), that good ole sustain (“Twist”), upbeat rasta sounds (“Windora Bug” with Markelis on vocals), a fan favorite tune co-written by Lawton and Markelis (“Gotta Jibboo”), and a song with lyrical references to Cottrell and Anastasio’s many adventures together (“Push On Til’ The Day.”) However, the most poignant highlight of the night was ahead of “Miss You,” a piece that was actually dedicated to Anastasio’s sister, who also passed away from cancer nine years ago. Before the song, Anastasio took some time to reflect in what was certainly a tearjerking moment of the evening:

“First of all, we did just have a memorial service today for our dear friend [Chris Cottrell] with 85 people in the audience tonight. Personally, I loved him so much. I just want to add that interestingly today is also the anniversary of the day that my sister passed away from cancer… and this gig was originally going to be the seven-piece [Trey Anastasio Band], but our dear friend [keyboardist] Ray Paczkowski is about to start radiation treatment for brain cancer, and he’s going to be fine.

And the thought that goes through my mind today as I am standing up here thinking about my sister, my best friend, and my other best friend that’s in my band… that every single person in this room must have a similar story. So this next song, I am going to send out to all of you and all of the people and loved ones in your life, I wrote this for my sister. And what an incredible celebration of life that we had today.”

In the end, the benefit raised money for a worthy cause, brought people together to honor a dear friend of Anastasio, and was a joyous celebration of life with an unforgettable display of musicianship that Phish fans will not soon forget. As we collectively journey though lives and seek refuge in the joys of music, we must sustain ourselves through the hard-times and always remember to celebrate the good.