Review and Photos by Max Stewart

Amplify Decatur Music Festival could not have been more of a booming triumph for the community, with the event’s best lineup to date entertaining the manageable crowd on a beautiful day, all the while supporting a great cause. A few minutes from the heart of Atlanta, Decatur, GA is a progressive neighborhood that hosts a variety of great restaurants, bars, and one of the best rooms in the country to watch some intimate music, Eddie’s Attic (a venue where John Mayer, The Civil Wars, Sugarland and many others got their start). It only makes sense that the founder of the event, Mike Killeen, chose the vibrant neighborhood of Decatur for the Saturday festival. The parent organization to Amplify Decatur, Amplify My Community was founded in 2011 and puts on similar festivals throughout the Southeast, including others in Asheville, Athens, Chattanooga, and Nashville.

All of the money raised at the 2018 festival will directly benefit the Decatur Cooperative Ministry, a group that aims to alleviate and prevent homelessness in Georgia’s Decatur and DeKalb County. Last year’s concert featured headliner Lucinda Williams and raised $40,000! Rob Scott from Decatur Cooperative Ministry, Christine Mahin from Lenz Marketing, and Amplify’s Killeen all graced the stage throughout the day to discuss the mission of the event, highlighting that last year’s event transitioned 300 people to permanent housing. Judging by the turnout last weekend, we would hope for similar results this year.

The day kicked off with local Atlanta progressive folk duo Dwayne Shivers, whose subdued yet warm set was a great way to ease into the festival as attendees put down their lawn chairs and claimed their little piece of real estate for the remainder of the festival. The duo of Micah Dalton and Anthony Aparos’ musical catalog has moments of introspection (“Waking Light”) and ambient acoustic pickin’ (“Young Man”).

Parker Millsap has gotten loads of hype and praise throughout the music world over the past few years, and for good reason. Upon walking on stage, it was immediately apparent that the 24-year-old Americana singer / guitarist had a commanding presence and confidence. “How you feeling Decatur?” Millsap asked to a crowd of varying-aged cheers. “We’re feeling ‘Woo-Hoo’ too!”

Millsap actually played a few solid new tunes from his upcoming album, Other Arrangements, which is set to be released May 4th. His to-be-released song “Tell Me” had a twangy blues feel, while “The Fine Line” had the grit and passion of Sixties garage rock.

Millsap’s live set had moments of FM radio gold melodicism, John Prine’s light-hearted lyricism, and some of the best of heartland rock. Seeing him perform his strong catalog live was certainly a mesmerizing display of soulful showmanship and musical craft, and most definitely one of the day’s highlights. Keep your eye out for this young lad, he will be around a long while.

Next up, Amanda Shires sang a number of her sweet and serene folk and Americana compositions for the captivated crowd. Although the set began with some technical issues, Shires made sure to keep the vibe upbeat and encouraged the audience to cheer on the man who had the eyes of the entire crowd on him as he worked to alleviate the issues. Kudos, Amanda. 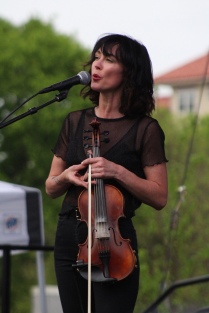 Playing songs off of her latest Dave Cobb-produced release and one of her best albums, My Piece of Land, Shires’ set felt like an antidote to all the chaos of the outside world. In addition to her pristine and angelic vocals, Shires is a phenomenal fiddle player, which she contributes to in her husband Jason Isbell’s band, the 400 Unit.  She proved herself an Americana all-star by singing lead and playing a flawless fiddle on “My Love (The Storm),” and a few of her new tunes marked a perfect segue into Saturday evening.

Alt-country vets The Jayhawks were a highly-anticipated act for many attendees, as Jayhawks apparel was rampant amongst the crowd.  Singer / guitarist Gary Louris immediately commented on the “great mission” of the event before launching into a career-spanning set.  The band has not lost an ounce of spark since forming in Minneapolis in the mid-Eighties, in fact their 2016 song “Quiet Corners, Empty Spaces” is one of their best and was a peak moment of their show. 1995’s Tomorrow The Green Grass was well-represented, including some stellar performances of “Bad Time,” “Nothing Left to Borrow,” “I’d Run Away,” and the well-loved hit, “Blue.” 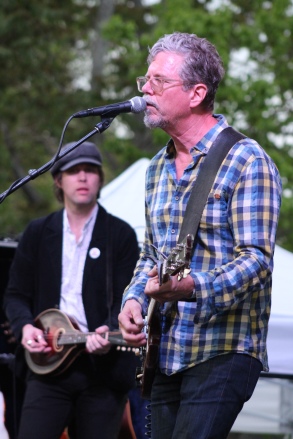 Something about the riff and melody of “Save It For A Rainy Day” makes me feel like I am in a happy montage scene from a classic feel-good, Nineties flick. Just me? OK. The high energy of “Tailspin” off of Rainy Day Music kicked the energy of the set into high gear as longtime Bassist Marc Perlman and Keyboardist Karen Grotberg kept the groove going. The acoustic ballad “Trouble” was a downtempo detour which led into “Tampa to Tulsa,” where Drummer Tim O’Reagan sang a portion as Louris took on harmonica duties.

There was even a cover of “Until You Came Along,” from the rootsy supergroup of Golden Smog, who has featured varying musicians including Dan Murphy of Soul Asylum, and formerly Wilco’s Jeff Tweedy and The Replacements’ Chris Mars. Overall, if you were a fan of Alt-country, The Jayhawks’ performance alone was worth the price of admission.

The event’s headliners, The Lone Bellow, was all the boot stompin’ high emotion one would expect from the soulful Americana trio. Although formed in Brooklyn, the group actually has some serious Georgia roots, as frontman and guitarist Zach Williams grew up in Acworth, GA and guitarist Brian Elmquist is from Sandersville, GA. Proving he was a real local, Williams dedicated the song “Deeper in the Water” to the former Atlanta staple and pirate-themed restaurant, Dante’s Down the Hatch.

Williams, Elmquist, and Kanene Donehey Pipkins’ vocals harmonize beautifully, which was most apparent when the band sang a number of songs ‘in the round’ through a vintage microphone (including the poignant “Come Break My Heart Again”). Led by the evangelical and passionate spirit of Williams, the singer noted that it was an “incredible honor to be part of [the] work” of Amplify Decatur, while reminiscing on his time in Georgia and attending Etowah High School.

A hilariously-impressive left turn of the evening occurred when someone in the crowd yelled out “Boyz II Men!”, which somehow inspired The Lone Bellow to sing a magnificent acapella version of “All My Life” (from another Nineties R&B outfit, K-Ci and JoJo.) If nothing else, this proved that the group’s R&B influences are real and they have the chops to prove it.

The Lone Bellow live performance has a sincere tone that demands the audience ride the wave of varying energies, from moments of soft lyricism to soaring crowd interactions. Their concert has all of the emotion of a musical roller coaster: the anticipation, the joy, and the satisfaction. It is certainly an uplifting musical event and The Lone Bellow will likely continue to grow in popularity in the years to come.

The Amplify Decatur Music Festival has come up with a formula that anyone can get behind: good music from a variety of talented musicians in support of a worthy cause. At the end of the day, it does not get much better than that. 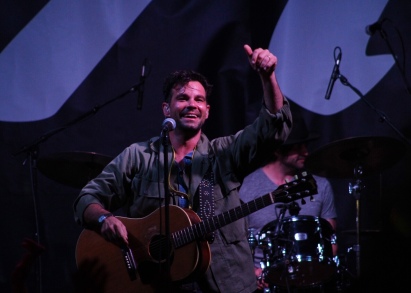 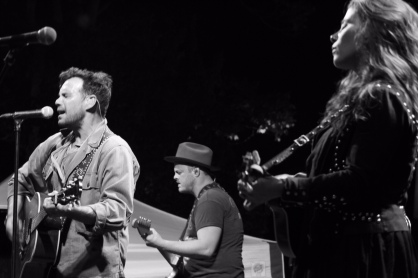 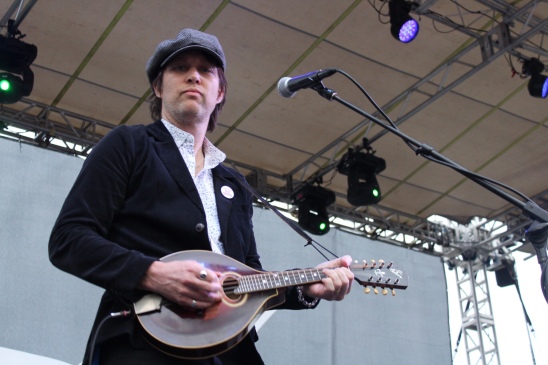 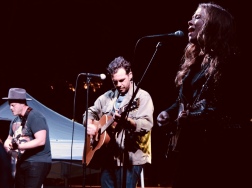