You know the anticipation you feel when you’re going to see a band you’ve never seen play before? You watch the lights go down; your heart rate accelerates; you sense the excitement in the room. Once the band begins to play, you’re suddenly grinning ear to ear. That’s standard at any show, but at when The Nth Power hit the stage, the energy was profound and incredibly dynamic. On a chilly April Wednesday in Maine, I had the privilege of covering The Nth Power at the Portland House of Music as my inaugural piece for LMD. I couldn’t have picked a better show. Even the venue was wonderful, everything felt perfect.

The trio consisting of guitarist and singer, Nick Cassarino, drummer Nikki Glaspie, and bassist, Nate Edgar, walk on stage shortly after 10:30 and begin playing the first notes to a new, unnamed song (Glaspie tells me she hopes to name it Come Back). Immediately, I, along with the rest of the crowd, start grooving. It’s hard to understand how such an intense sound and extraordinary energy can come from only three people. Although I see many music groups that work well together, it is rare to see such an intense fluid connection in a band. They play together as a single unit. It’s natural. It was as if I was meant to be standing there at PHM, listening to Edgar’s funky bass guitar play as Glaspie effortlessly wailed on the drums. The constant compelling tempo changes keep you dancing as you find yourself getting lost in each verse Cassarino sings. The pure enthusiasm cascading from the stage was nothing like I expected. Now don’t get me wrong, their studio albums are beautiful, but it’s nothing like watching the exuberant magic happen before your eyes.

Edgar and Cassarino gravitate towards Glaspie, like planets rotating. Every role fits as you watch each member become one with their instruments. It always amazes me when someone can pick up an instrument and portray an emotion. By the fourth song, Cassarino has left the audience swooning as he belts out the lyrics to the song Truth: “It doesn’t matter how we feel, will you fight for what’s right or will you take the deal?” Edgar’s fingers are grooving with the bass as Glaspie strikes the drums with an impressively strong, yet butter smooth force.

While chatting with Glaspie prior to the show, I had asked about her interest in going to shows herself. Once she informed me she usually doesn’t attend concerts, I believed I understood why. I didn’t realize exactly how much depth there was to my question, until about half way through the show. As I danced to the dreamily funky beat of the song Spirits and watched Glaspie beam at her bandmates, something clicked. It’s not only because she’s busy touring, it’s because she would much rather be touring. Why would she go to a show when what she loves most is the music she plays? You can feel the passion in every song. The Nth Power pours their unified heart onto the stage with raw and magnetic emotion. When you watch them play, you feel yourself being drawn into their soulful spirit. 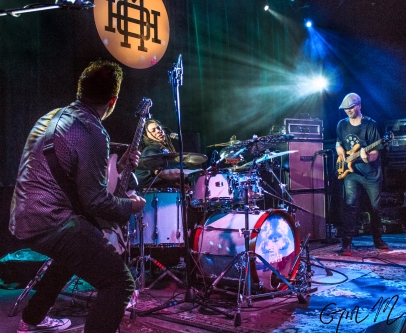 After serenading the audience with the last two heartfelt songs, Only Love and Only You, the audience begs for an encore. The trio builds suspense as the encore Take My Soul began to play. It truly took  breath away and stole my soul. As the trio fed off one another, the energy built continuously as they jammed. I felt my love for music exploding out of my chest. This band represents something deeper than just music. You can see it in their faces as they get just as lost in the music as the audience does. You can sense that this is so much more to them than just playing catchy songs.

Dancing alongside an audience of smiling faces was exactly what I needed for a midweek revival. Seeing the Nth Power is more than just going to a concert. Their message to spread peace and love soothes the soul. I feel renewed and inspired. If you don’t go see the Nth Power while they’re touring, you are missing a truly sacred experience. You must experience the phenomenally soulful talent for yourself.