Whale then. Whale-grass. Blue-Gnarls. Honestly, trying to describe Saturday night’s double feature of Horseshoes and Hand Grenades & Jon Stickley Trio at Asheville Music Hall in any conventional way seems completely absurd. Not that I thought this was going to be an easy task.

Truth is I spent most of the early part of the evening talking about how terrified I was to try to review this thing. I’ve been a fan of HHG for more than five years now and have literally pissed myself at a JS3 show because there was no indoor bathroom and no re-entry… but that is a story for another day. The story happening right now is all about a couple of young bands completely transcending the limits and the perceived boundaries of what can be considered bluegrass music.

I’m running late right from the start due to a car crash on Patton Avenue, and by the time I get to the show the place is already nearly full, something you don’t expect at 8:15 on a Saturday night. It seems the word is out about these two bands.

I grab a beer and chat with Adam Greuel from HHG while the opening act finishes up. He assures me that there will be plenty of collaboration before heading back to the green room to prep for the show.

Then it’s time for the main event. HHG walks up onto the stage, instruments in hand, and dive straight in with JB’s Dream. The crowd is diving right in along with them, myself, and many others I am sure, coming off of a difficult week full of grinding out jobs and trying to hold on to relationships, and we are ready to be lifted.

They follow Dream with one of my favorites, Whiskey, which they take into a cover of Time by Pink Floyd. I’ve seen this transition on YouTube and I’m pretty excited about it. What I don’t expect is for them to take it one step further, and rather than coming back to Whiskey right away bassist Samuel Odin steps up and takes over the first bluegrass cover of Gnarls Barkley that I have ever heard. When Crazy (and it is) is finished they pedal back into Whiskey and the crowd collectively loses their shit, screaming along at the top of their lungs.

My friend Geoff looks at me and explains that this band is so far in the future and yet still completely rooted and, truth is, I can’t think of a better way to describe what they are doing here. Following the Old-Tyme tradition of one microphone this five-piece from Wisconsin is managing to firmly respect the past while pushing the genre steadily into the future.

They bust through a set list full of new, original music, covering only one other song – Home by The Talking Heads. As the accordion plays and the tune fills the room I find myself being completely overtaken. I can’t imagine a moment more beautiful, I can’t think of a better place to be, I can’t dream up a better band to be listening to.

As they close out their set they bring Jon Stickley on stage for a number, Greuel and Stickley facing each other, thrashing their guitars like they are planning on buying new ones the next day, and clearly having one hell of a lot of fun. The vibe is so contagious, so powerful that I find myself crowding the stage, hand toward the mic, hoping to somehow absorb some of the talent and beauty that is dripping from the stage right now.

Then it all pulls to a close and HHG leaves the stage. JS3 is up next and I know that they are one of only a few bands (Billy Strings and The Little Smokies come to mind) that could follow up that performance righteously. Honestly, I can’t believe this bill, it’s like seeing The ’Dusters and Greensky play with each other ten years ago.

JS3 wastes no time getting right down to it, taking off with an older song before heading into a powerful Point to Point>Play People that has the entire crowd grooving. What exactly am I witnessing, I wonder to myself. This isn’t bluegrass but it’s also not anything else. I remember describing it once as Celtic-infused thrash-grass but even that seems to be a fragile and imperfect description. 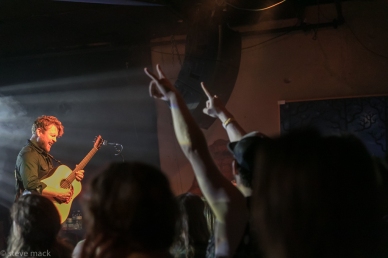 And to be honest, this isn’t the same band I have been seeing for the last few years. It’s only a trio, so a single adjustment makes a big difference and parting ways with former Atmosphere drummer Patrick Armitage while bringing on jazz-savant Hunter Deacon has changed their sound even more than I anticipated.

Armitage was a heartbeat, a powerful pocket drummer keeping time on the high-hat, a constant beat backing Lyndsay Pruett’s fiddle and Stickley’s guitar. Deacon is something else entirely. A true jazz drummer he isn’t keeping time so much as making it. There are entire sections of songs that he just sits back and watches, checking in at just the right moments, making more room for the others while taking up a massive amount of space himself.

His riffs are otherworldly, his style mirroring the “take-no-prisoners, jump-at-all-chances” approach of Pru and Stick and his contribution to the band is the ability to take certain songs to a completely new place while being able to get the fuck out of the way when necessary.

This is perhaps at no point more intensely obvious than on Slopes, an old Seldom Scene song that JS3 has grown quite fond of covering. He brings the chops (both figuratively and literally) to push songs to another level, something I, as a die-hard JS3 fan for years, can barely believe is possible.

They finish out with Micro-Bruise and Darth Radar before calling Horsehoes and Hand Grenades back to the stage for a double encore. Encore’s are a tricky thing. Do you play your own song? Do you play covers? Do you chooses something you love or do you try to play to the audience?

Many a great show has finished with a lackluster encore, and many a tepid show has been raised by a well-chosen one.

But no one I have ever seen, and I literally mean no one, has nailed an encore like this. With all of the members of both bands on stage this octet launches into a ten minute version of Last Dance with Mary Jane that even the notoriously picky Tom Petty would have found himself grooving to. It’s dark and it’s dirty and it’s dripping with tier-two and tier-three jams by Stickley, Pruett, and HHG fiddler Collin Metelka.

When it’s finally over they hardly break at all before heading into one of the most inspired versions of Sitting On Top of the World that I have ever heard. About halfway through they give up on Doc’s (Doc Watson) lyrics and Greuel begins to improvise.

“This one’s for the lovers,” he tells us, “and all the broken hearts, cause broke is the place where everything starts.”

Then, as all things do, the show comes to an end. The Asheville crowd, a difficult group to impress, walks back out the doors knowing something they can hardly ever be confident of in this crazy town. Tonight, they were at the right place.

Caleb Calhoun is an author and journalist who makes his home in Asheville, NC. He lives with his mermaid, Dr. Gonzo, and about 15 roommates. You can read more of his writing at Facebook.com/GonzoNC. 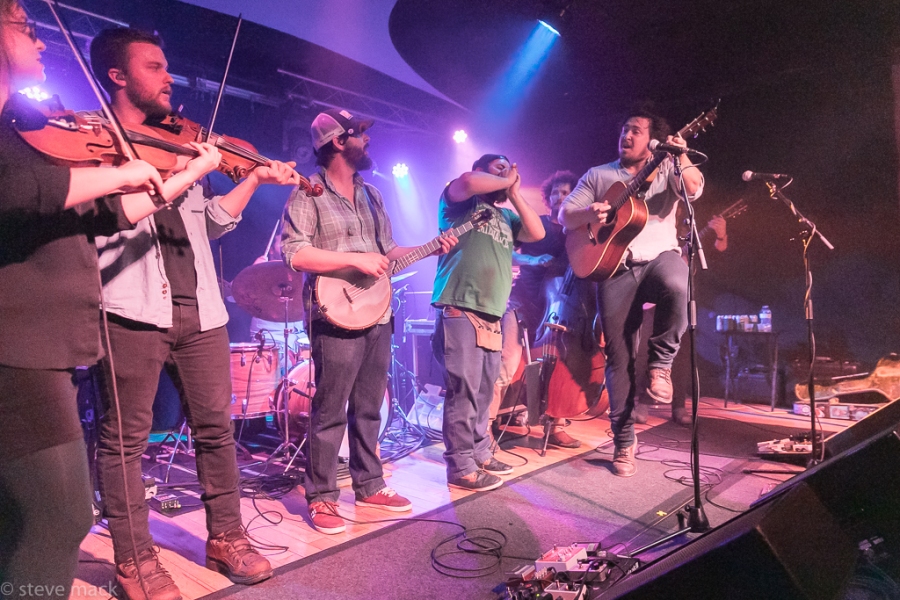