I am a 28 year old fan of the Grateful Dead. Until Dead & Company formed, I had not truly experienced power of the Grateful Dead’s musical spirit live. Sure, I had seen various iterations of the Dead’s music in the form of founding Grateful Dead members Phil Lesh and Bob Weir’s band Furthur, Phil & Friends as well as countless cover bands that include Joe Russo’s Almost Dead, John Kadlecik Band, Dark Star Orchestra, all of which were excellent adaptations… but not quite the real thing. Not to mention, during my yearly pilgrimage to the country’s best festival, LOCKN’, the Dead play an integral role and almost seem to be a through-line during the weekend (i.e. “Garcia’s Forest,” a Jerry Garcia-themed forest on the farm). 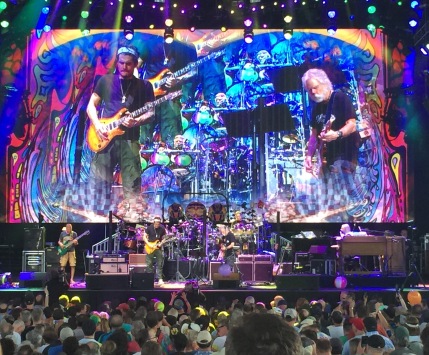 Thanks to the vast live recordings that exist, I have been able to sonically tap into the magic that made hundreds of thousands of people follow the Grateful Dead for many years. What I had been lacking, however, was the immersive live experience surrounded by a group of people on the same musical osmosis journey. I had not truly felt ‘it’ live yet.

When Dead & Company first announced formation in 2015, after the successful Fare Thee Well concerts with Trey Anastasio (which, to be fair, I only streamed), I sprung at the opportunity to catch them at Washington D.C.’s Verizon Center.

With a lineup that includes original Grateful Dead members Bob Weir, Bill Kreutzmann (Drums), Mickey Hart (Percussion) as well as Bassist Oteil Burbidge (Allman Brothers Band, Col. Bruce Hampton’s Aquarium Rescue Unit) and Jeff Chimenti (RatDog, Furthur), and, yes, John Mayer, what live music fan would not be intrigued? Sure, I was aware of the gifted musicianship and Blues guitar aptitude of John Mayer, but like many others, I was not sure if this was a gimmicky stunt that would last one tour and leave Dead historians twenty years from now scratching their heads. 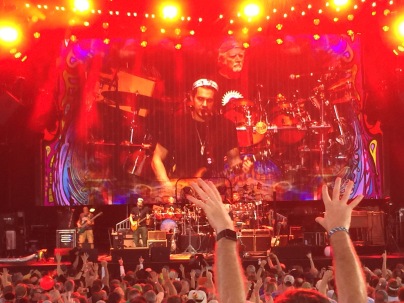 The November 2015 concert hit some mighty high water marks (“Bertha”, “Brown Eyed Women”, “Scarlet Begonias”), and it was clear that this band had the roots of something remarkable. It did feel that some of the instrumental sections had not been fully-realized, with the band still getting used to their collective chemistry. After all, a learning curve should always be expected after an improv-heavy band forms.

Fast forward the clocks to a year and a half later at Jiffy Lube Live amphitheater in June 2017. Dead & Company have figured it out, and then some. Mayer has certainly come into his own as the lead guitarist, knowing when to lead the charge and carry the weight and when to let others steer the ship. 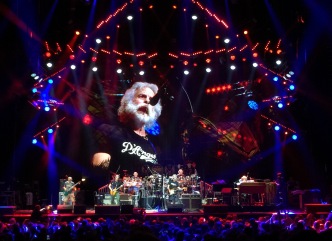 And his razor-sharp mastering of the guitar. Wow. During “He’s Gone,” Mayer actually dueled with himself, playing call-back notes like a Deadhead savant. Unlike many guitarists that try to mimic the tone of Jerry Garcia and come off as clone adaptations, Mayer has managed to create his own unique style that fits perfectly amongst the songs in the Grateful Dead’s catalog. It must be a surreal moment for Mayer to sing “Althea,” a song that he has claimed was his entry point into the world of the Dead thanks to a Pandora playlist (thank you Pandora algorithm geniuses).

“Althea” is a favorite of Senator (and former Saturday Night Live castmate) Al Franken, who was in attendance and is featured in the extensive recent documentary, Long Strange Trip. The venue in Bristow, VA – just outside of Washington D.C. – meant there were some political undertones to the night’s set, including passionate renditions of “U.S. Blues” and “Liberty.” That being said, the politically-fatigued DMV crowd was not bogged down with soapbox agendas and decrees. Dead & Company has found the perfect balance of not being exhaustingly preachy, but making sure to take a stand and have their voices heard on worthy issues (i.e. Bonnaroo 2016 after the Orlando shooting). On second thought, was their performance of “Man Smart, Woman Smarter” a subtle dig at the results of the Presidential election? Hmmm… I digress. 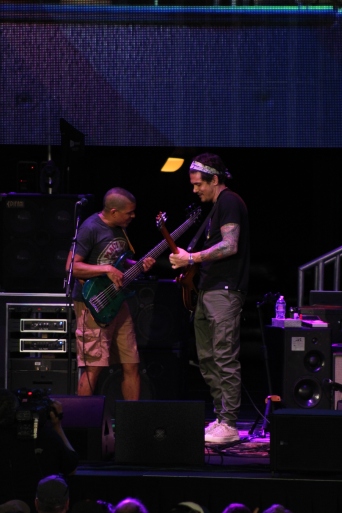 I challenge you to watch Burbidge on stage without cracking a smile. His childlike exuberance is infectious, and it is so obvious how grateful (pun intended) he is to be playing in Dead & Company. His swampy bass style is the backbone of the band’s groove, not to mention his smooth vocals shined brightly on tunes such as “Fire on the Mountain.” Burbidge is a shot of life and excitement in the band from a musician who has the equivalent of a PhD in rock, having ‘studied under’ the iconic Col. Bruce Hampton and Gregg Allman. Chimenti has the keys chops to ensure the band stays on course, and there is an obvious connection between him and Mayer as they routinely give each other head-nods and musical cues throughout the night.

The original rhythm guitarist and overall cool cat Weir (“born in the desert, raised in the liiiion’s den”) looks to be genuinely enjoying himself as he shares primary vocal reigns with Mayer. He does even occasionally step into the forefront for some impressive lead parts (the slide on “New Minglewood Blues”). Weir is the wise elder statesman who has lived through it all, and we are just all gathered around the campfire bright-eyed hanging onto his every word. 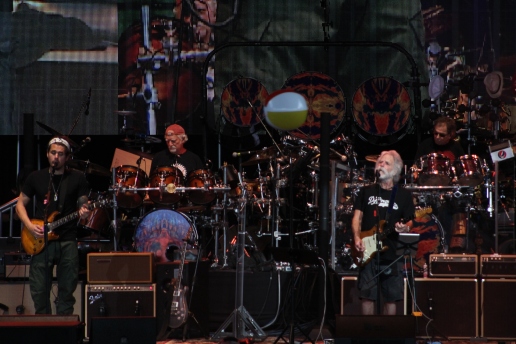 The dual Grateful Dead rhythm team, Kreutzmann and Hart, are as tight as ever. The progressive “Drums” > “Space” jams no doubt lend themselves to the electronic-leaning twenty somethings and Hart is clearly hip to all sorts of unique rhythmic stylings. Talk about consistency, these two have been a percussive powerhouse for many years with no signs of slowing down.

The fact that Weir, Kreutzmann, and Hart are all on stage together, healthy, and still performing these songs makes the entire Dead & Company experience one of a kind. Cover bands are great and all, but you can’t beat the real thing. Having the original members perform as the set peaks to new levels of altitude is a major reason that Dead & Company thrives.

Within 10 feet from my seat at Jiffy Lube Live included a group of middle-aged dads following the band on tour, a family of six with a two young kids, and some young college students. Regardless of the various ways we were individually introduced to the Grateful Dead, we were all there. Together, in the moment. As I sat amongst the exuberant Deadheads of varying ages, races, and creeds, I finally felt the addictive live energy that defines the Dead concert experience. I was moved by the spirit of the Dead. 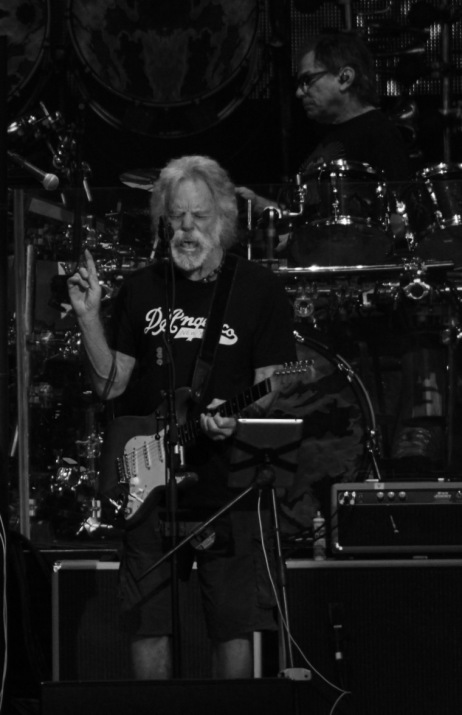 An unfortunate Millennial stigma is that some in my generation have the misconception that the Grateful Dead are the band that brought a tie-dyed, traveling circus to every town in the U.S. I think the dancing bears and free-love fans sometimes have a way of overshadowing the band’s immense musical achievements for some, especially those that are a generation removed from Jerry Garcia.

Moreover, I think Mayer’s inclusion in this stacked musical powerhouse allows otherwise non-Dead fans to be exposed to the magical journey that fans take live to get to “that place.” Hopefully some of Mayer’s fans will be drawn to see him take a backseat from his normal frontman role and allow the Shakedown soul to take the wheel. Phish’s Trey Anastasio had some sage advice for Mayer at the Fare Thee Well shows before he joined Dead & Company, that I think Mayer has taken to heart: “This doesn’t belong to anybody. It doesn’t belong to you or me or anyone else.”  He is absolutely right. It is not Bob Weir’s. It is not lyricist Robert Hunter’s. It is not Phil Lesh’s. Hell, it was not even Jerry Garcia’s. When the Grateful Dead formed they created a culture-shifting musical phenomenon that exists now beyond anyone’s control. The Grateful Dead is an experience, much more than a band. I would encourage anyone that has the slightest music taste to see Dead & Company and understand why this band is so much bigger than a fleeting phenomenon.

One thought on “Dead & Company: Proving the Phenomenon 50 years later”