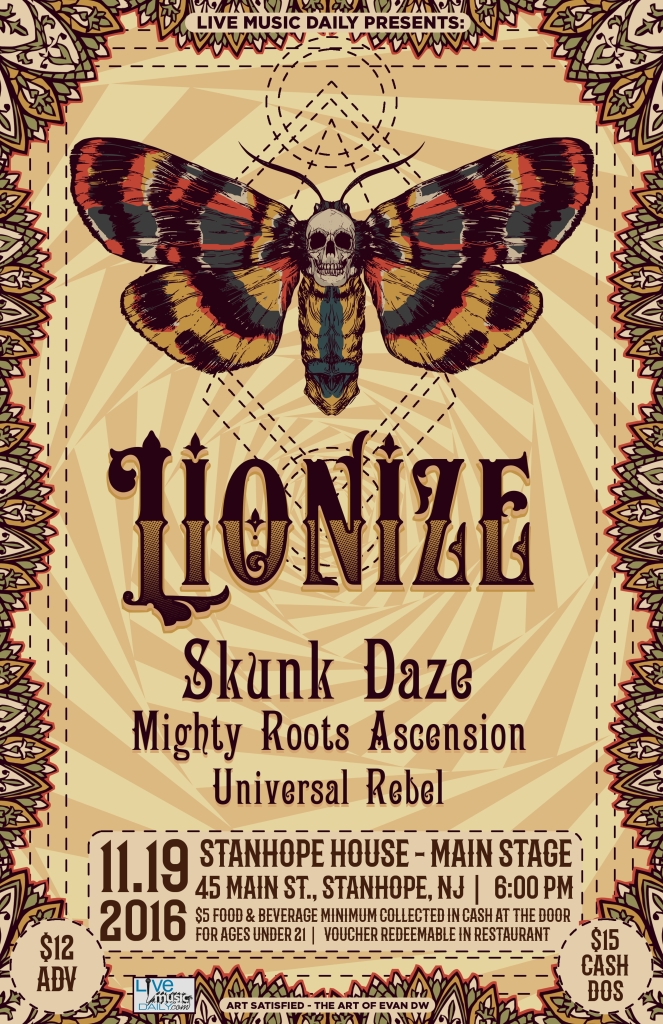 Hailing from suburbs of Washington, DC – Lionize has steadily solidified it’s name amongst the ranks of the greatest touring bands today. Having supported Clutch, Steel Pulse, Bad Brains, The Sword and countless others across North America and Europe the band continues to push the envelope on record and on stage. Live Music Daily is pleased to announce we are teaming up with Lionize, Skunk Daze, Mighty Roots Ascension, and Universal Rebel at Stanhope House in Stanhope, NJ.

With their signature blend of Heavy Organ, Rock Riffs, Funk-laden grooves and three-part harmonies to group continues to wow audiences and gain a following of true believers in live magic. With an obvious admiration of Deep Purple, The Allman Brothers, Black Sabbath and Parliament Funkadelic the quartet has forged a sound uniquely their own. From the stages of 9:30 Club, Red Rocks, and even Los Almiros Festival in Volos, Greece – if there is a chance to see this band live, it is not one to be missed.

We are really looking forward to get back to Northern Jersey and hit the Stanhope House again. We really enjoyed the last show we played there and it will be an nice warm-up to our approaching European Tour with Clutch. Joining us for the night will be some great support bands including Jersey’s own Skunk Daze who put on a great show. Hope to see some old and new faces at the jam!” – Nate Bergman (Lionize)

The Recording Industry infrastructure as we traditionally knew it has collapsed. There are an overabundance of new acts and mainstays all trying to figure out how to exist as the market place to hear music expands but the value of music, and market place shares have decreased. How does a world-traveled, seasoned band survive without folding like so many have as the “industry” playing field continually changes?

In ten years of living in relative obscurity to the mainstream pop cultured music audience Lionize has garnered a reputation as an explosive live act and recording group amongst fans, concert- goers and legendary musicians across the globe. Lionize are taking 100% control of their destiny by going back to their roots and taking a page from the DIY Handbook. Minor Threat, Bad Brains, Scream, Gov’t Issue – all Washington, DC area bands never needed the hand of a major label, radio play or main stream exposure to gain a powerful reputation as completely independent and self-sufficient artists. Lionize will begin a journey into their 10th year with a renewed sense of purpose, taking the cue from their predecessors who smirked at the term â€œindustryâ€ and make their own rules when it comes to recording and getting their music to their fans.

The band has spent the last several months building out their “Lions Den” studio in a Maryland suburb of Washington, DC where they have meticulously selected hand crafted material, recording gear and instruments in which to begin recording with. Every detail overseen and executed by the band themselves, from fulfilling merch orders to placing microphones to editing the songs as well. Almost every month new material will be made available world wide and distributed directly from the band, physically and digitally. After the first 4 singles are released in the fall and winter of 2015, early 2016 will see a series of 4 EP’s released that lead up to the next full length album from the band, tying everything together. An ambitious and ground breaking effort from an equally ambitious band.

Beginning in the fall of 2015 Lionize will begin the story of writing, recording, producing and releasing their own material at what some would call a prolific rate. With the release of several singles a month until the new year, the band will unfold their strongest material yet, a reflection of a massive growth in sound and performance since 2014’s ‘Jetpack Soundtrack.’ Borrowing from their influences in the aforementioned Bad Brains, Deep Purple, and Parliament Funkadelic, the band finds itself in new musical territory, ringing in endless possibilities for the future. The massive riffs, exciting melodies and classic groove-oriented sound the band has trademarked since 2005 all comes crashing to a head with these new songs – resulting in material that will leave their current fans chomping at the bit for the next release – and newly garnered fans wondering where they’ve been all this time.

What defines Rock and Roll? How does a band meld a multitude of sonic colors into a uniformed and utmost original sound? When does a band cross the threshold from ten year relative obscurity into legendary status amongst it’s fans and musical peers? Lionize answers all these questions with simply continuing to survive and thrive in a class all their own, carrying a musical flag that no one else is waving – and being an example of hope to any artist that wants to remain true to themselves.. The days of Lionize living on the fringe are seemingly numbered with each coming release – as the band exemplifies the meaning of DIY.