Last night marked the 13th show at Dick’s Sporting Goods Park in Commerce City, Colorado. The energy was palpable as the quartet walked on stage at 8:16 PM, nearly two weeks removed from an exhilarating run at Watkins Glen International.

At Dick’s, you know you’re going to get strong openers. The combo of ‘Tube’ > ‘Ghost’ explored setlist territory not regularly ventured to open a show. It also put to rest any hope of that night 1 would spell anything. For those following at home, the show spelled ‘Tghuybwhwf4r Wbgrfwwhbhl’.

I had high hopes for ‘Undermind’ after hearing them jam it for 17 minutes at soundcheck earlier in the day. However, no one seemed to want to take the reins and we ended up with solid, but standard version. (I felt I heard a ‘Crosseyed and Painless’ tease from Trey during Ghost and Undermind. I spent the rest of the night eagerly awaiting the cover and will continue to do so this evening.)

Any wind that was taken out of the sails during ‘Yarmouth Road’ was quickly restored with a smoking ‘Bathtub Gin’. I was looking forward to something along the lines of ‘46 Days’ to keep the energy up after ‘Gin’. Instead I was left ‘Waiting All Night’. This was the perfect time for me to hop to the back of the floor and work on my hooping- a session that was prolonged with the onset of ‘Horn’.

The sequence of ‘The Wedge’, ’46 Days’ > ‘Run Like An Antelope’ was a strong tri-fecta placed in late first set. I was dancing so hard I picked a random water bottle on the ground at set break. With thirst quenched, my compatriots and I were ready for Set II.

The world has been waiting for a second set ‘Wolfman’s Brother’ for some time (I realize they opened second set Saturday Magnaball with this but don’t classify it as such because 4 sets were played that day.) An excellent version was headed into the abyss when Trey opted for ‘Blaze On’. Making its 9th appearance of the summer, ‘Blaze On’ affirmed that it can be inserted anywhere in a set list. And then Phish took their new jam vehicle and got dark. The Blaze jam was reminiscent of something we could expect from ‘Carini’. They stopped the jam for a much need group hug in ‘Golden Age’.  The composed section of ‘Golden Age’ was a cringe worthy struggle. Trey kept forgetting lyrics and then fumbled the solo leading to the jam. Just when I thought they were going to hit the ‘next button’, the band took it to the cosmos. Fishman started doing that be dop ba do ba thing, while Mike was all like boom digga digga boom chop, Page was doing his diddly diddly shoom dow, and Trey was scibbiddy scoodly spat. It was great and you should check it out.

Second set ‘Roses Are Free’. Yes, please. The circus was about ready to explode had ‘Roses’ been jammed. It wasn’t extended, but I don’t think there were too many complaints.

‘Fuego’ contained a short, but nice jam, though I cannot recall anything specific to note other than you could hearing ‘Wading in the Velvet Sea’ coming a good minute before they actually started playing it. I’m not one to suggest another ballad (coughs Lifeboy), but ‘Wading’ has become a bit too predictable.

It seemed as though a lot of people went to try their hand at hooping in the back during ‘Wading’ because I had an enormous amount of space for high steppin’ by the time the ‘Walls of the Cave’ jam started. Thus ended the second set on a very energetic note.

I predicted the encore. I didn’t, but I don’t think anyone did. Trey appeared with a ‘Let Fish Suck’ shirt and decided to let the little drummer boy do just that. I happened to catch the last HYHU> Bike > HYHU at Deer Creek 6/28/12 (go listen to that show if you haven’t). It seemed a lot of the audience didn’t know what was going on, but everyone seemed amused. Little man in a dress, sucking on a vacuum- it’s great stuff. One of my buddies bolted for the exit in disgust, thus missing the predictable, but always fun ‘Loving Cup’ closer.

After 13 shows at Dick’s, the band is clearly comfortable enough to come out for an encore and have their drummer run around on stage sucking a vacuum. That’s who they’ve always been. They don’t do what you want when you want. They do what they want when they want, and it’s usually pretty awesome. I thought it was good, fun show. I also think they can bring it much harder, and they will. I know I’m going to pop a Cialis at around 8pm and wait for the Dick spaceship to blast off. 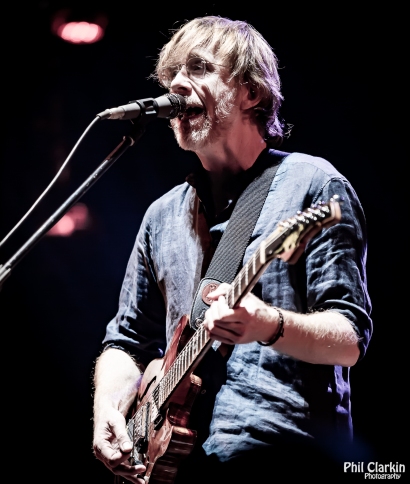 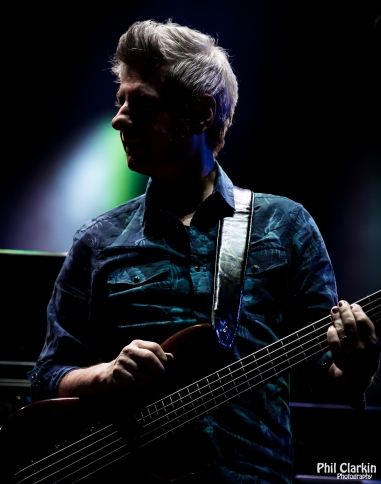 Special thanks to Byron Ward!