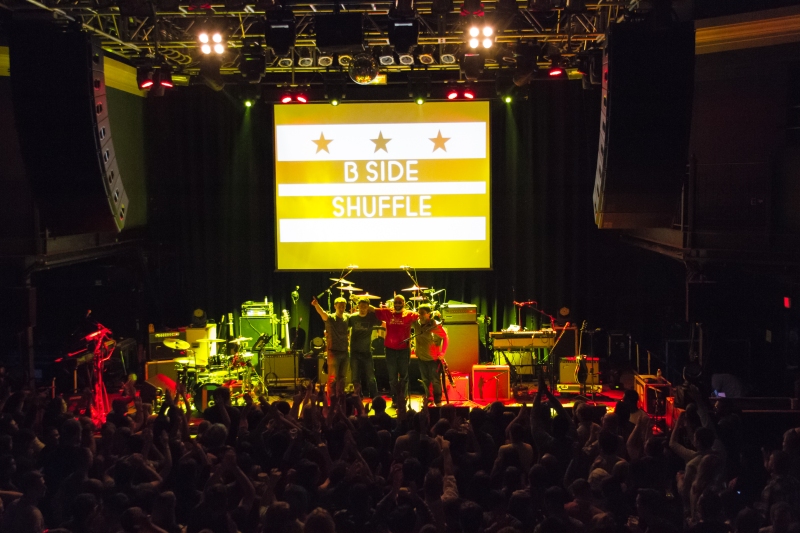 DC’s thriving music scene is full of diverse acts ranging from the gypsy rock stylings of rising stars like Black Masala to underground hip-hop offerings of Asheru to the jam based acts that thrive on live improvisation. B-Side Shuffle has emerged as one of the top rising blues-jam-prog-rock acts not only in DC, but in the region as a whole. They’ve shared the stage with highly notable talent, have released a very strong sophomore album, and garnered a strong regional following. Best of all, the band is just getting started and has no plans of slowing down soon.

Andrew McConnell of LiveMusicDaily spoke with the band about their formation, Farmalade, their upcoming July 3rd show with Pigeons Playing Ping Pong at the 9:30 Club, and much more.

Could you start by telling us about the unique “first sessions” and the “out of the box” locations where you first started?

Geoff Browning: Jasper and I rented a small room in the back of a pie shop in D.C., bought lots of beer and pie, and invited random people to come over and sit in. Carter and Nik have considerable music-ninja skills, so when the group clicked, it felt apparent to all of us. We eventually graduated from the Pie Shop to our own real practice space, at which point we started getting really ambitious, haha. It’s been a wild ride from there.

Even as a relatively new band you guys have honed your sound very quickly. How do you feel that you’ve grown closer together, in terms of on-stage chemistry, since you first started ?

Jasper Drisko: That’s a good question. I think as we started playing bigger stages and outdoor shows last summer, we got more comfortable in general, both individually and as a group. We all learned a lot about how to feel as ready as possible to perform and play our best. Once we got that foundation, it allowed us to relax and have fun, which comes across in how we sound and the energy of our set.

It seems like you guys do a lot of sit ins—any sit-ins in the works for the near future?

Geoff Browning:  The horn section from Yellow Dubmarine (Danny Davis and Mario D’Ambrosio) are sitting in with us this week at the 9:30 Club. Those guys are great.

Last weekend, Ron Holloway sat in with us at the Mad Tea Party Jam. He’s basically our DC sax hero, so that was an awesome surprise. Marc Worden from Appalachian Jamwich Magazine totally made that happen, too—Ron was there to play with his own band, who headlined Saturday night, so Marc (being an awesome friend) drove Ron to our stage on a golf cart, at which point we all realized what was going on, got really excited, and started playing the Meters.

In what ways has the opportunity to play festivals allowed you to grow as a musician and on a personal level as well ?

Jasper Drisko: Festivals are special places with a vibe and feeling you don’t find anywhere else in the world. There is so much acceptance and appreciation of art and music in one place, it’s amazing. I think being able to meet, interact with, and observe so many extremely talented musicians in one place has really helped me grow as a musician. It’s so beneficial to watch these pros and pick up tips and hints from their various playing styles, attitudes, love of their craft, and the general way they conduct themselves while working but also relaxing and enjoying themselves at the same time.

How has DC’s music scene provided B side shuffle with unique opportunities ?

Geoff: Our hometown music scene is all over the map. There’s a LOT of very different, very cool stuff going on, and it’s not necessarily centered around any venue or set of venues. It’s the nation’s capital, creative people move here from all over, and the city itself has a lot of history that looms large—musical and otherwise. It has been a very cool place to start out and find our way as a band.

Nik Sus: Diversity is the name of the game in DC, whether you’re talking about the people, the food, the arts, or, of course, the music scene.  We strive for a sound that reflects that diversity. There are elements of rock, funk, soul, world-beat, psychedelia, reggae, and everything in between.  The common denominator is that we want to get everyone up and dancing, no matter their background or musical tastes.  DCers are a hard-working bunch — they deserve to let loose and have some fun at the end of a long week. We’re here to help!

As I mentioned you guys are all about having people sit in, on a similar note what artists who personally inspire you have you had the opportunity to share the stage with ?

Geoff: Oh man, tons. That’s one of my favorite things about being in this band. A few that come to mind (in no particular order) are Moon Taxi, the Revivalists, Keller Williams, Papadosio, Big Something, the Everyone Orchestra (with Joel Cummins from Umphrey’s McGee, John Kadlecik, Cris Jacobs from the Bridge, Jennifer Hartswick, and Natalie Cressman), Jah Works, John Brown’s Body, Consider the Source, Turkuaz, Tauk, Dopapod, and so many more. It has been a tremendous learning experience for all of us, and it makes me really excited about the future.

Lots of bands you guys find inspirational obviously thrive on the live improvisational elements, but I can also hear a good bit of progressive rock in B Side’s sound. Where do you feel this prog rock element comes from in your sound? Are there particular direct influences, or is it something that comes naturally?

Nik: Our prog rock influences are subtle, so it’s nice to hear someone pick up on it!  We each have prog influences coming from different angles.  Some of us are into more modern prog metal stuff like Mastodon.  I’ve always been a fan of the prog forefathers — King Crimson, early Genesis, and early Floyd.  The thing about prog is that there’s a fine line between what’s interesting and what’s self-indulgent.  We don’t want to alienate audiences by playing discordant noise or hyper-technical guitar riffs for an hour.  So the way we straddle that line is by carefully incorporating tight little prog snippets — a riff here, a riff there.  Enough to keep it interesting without overstaying its welcome.

From a songwriting perspective, the most important things to us are good melodies and tight rhythms.  That’s your foundation.  Everything else is just icing on the cake.

Your sophomore album, Farmalade, has been a well received piece of work, could you walk us through the recording process ?

Geoff: The new album was a logical step forward from the first.

The first time we ever recorded, it was a super DIY project in my kitchen. We wanted to do it there so we could take our time and be comfortable, rather than be under the time crunch of a proper studio, where we might get better signal fidelity on each track, but end up with something that reflected a rushed “time is money” tracking process.

That worked surprisingly well, and for the second one, we expanded on the same concept. My friend Britteny has a beautiful farm in Warrenton, VA, about two hours outside DC, called Castle Hill Farm. The first time I went there, years before B Side, I knew the farmhouse would be a perfect place to set up and record someday. So we did.

Rob Shaffer (our producer) came down from Philly with like six cases of recording gear (basically, a studio in a box), we all brought shitloads of sound baffling equipment, our engineer Alex Kozen brought all his gear, we rearranged all Britteny’s furniture, and we took over the farm, playing a really loud show for the horses consisting of the same five songs over and over again for four days.

The songs ended up taking a life of their own during the process—partially because Rob is so damn good at getting us to free up and think the right way (seriously, he’s like Rick Rubin minus the beard), but also partially because we were all so comfortable and excited in that new setting. It was a great, life-long memory for all of us, I think.

You guys were on the bill in April for your 9:30 Club debut alongside the Revivalists and Moon Taxi.  Could you describe what it means to be playing at one of the best venues in the country?

Geoff: It provoked lots of introspection for sure. I’ve been going to shows at the 9:30 Club since college—much like some of the other big shows we’ve played, seeing it from the rear side of the barricade kind of humanizes the experience. I had a blast hanging out with Moon Taxi and seeing how they operate, too—Trevor Terndrup and Wes Bailey are smart, grounded dudes.

The 9:30 Club is really well run also. Getting to play there for a sold-out crowd singing our songs was a great feeling. The venue staff brought us cupcakes and beer, and we watched the Revivalists from this cool perch directly above the stage—it was very exciting, but the elation only lasted for about ten seconds, after which I was like “Okay, now how can we do this again, and make it even bigger?”

Also, what can fans look forward to at your upcoming performance with Pigeons Playing Ping Pong this Thursday at the 9:30 Club?

Geoff: If it sells out, Jasper will wear a dress and we’ll raffle off a free pony.