Words and Photos by Nicholas Stock
Audio by Zachariah Boes

Joe Russo and his cohorts have been deconstructing and rebuilding the music of the Good Ol’ Grateful Dead for some time now. From opening up for Umphrey’s McGee in 2016 to a regular August headlining show, Red Rocks is quickly becoming the best place to see this band live. It’s obvious to see how far Joe Russo’s Almost Dead has come in just a few short years. This show acted as a pre-party to the annual Phish brouhaha over at Dick’s Sporting Goods Park meaning tickets sold out about a month in advance. Traffic spewed out of multiple entrances by the time we arrived around 7 PM. Lots of out-of-towners new to the venue clogged the arteries as parking spaced filled up and people were forced to pull over wherever they could find room. The music began right before 8 PM with late comers scrambling to find a decent vantage point.

As the sun set and darkness washed over the crowd JRAD took the famed stage. The regular band was joined by multi-instrumentalist and friend Stuart Bogie who lent his amble talents on sax and flute throughout the entirety of the show. The band eased into the first number flexing their improvisational muscles early before rocketing into a smoky version of The Beatles’ “Why Don’t We Do It In The Road.” “Foolish Heart” was the first of a number of rare Dead classics that made an appearance. They continued with a ridiculous “Shakedown Street” featuring a nod to Phish in the form of a stellar “First Tube” jam. That gave way to a riff on Terrapin Station before they returned to “Shakedown Alley”… I mean “Street.” Scott Metzger took the mic on Chuck Berry’s “Around and Around” before the audience was treated to a beautiful “Wharf Rat.” JRAD closed the set with another off of Built To Last; a rowdy “Hell In A Bucket.”

JRAD is utilizing the music of the Grateful Dead as a foundation for something much bigger. They have no limits when it comes to canon or time. They can do things the Dead would not, like slap a Phish song in the middle of “Shakedown” or blast off on a Bruce Springsteen cover during encore. JRAD can and will do it all, just watch. The band sauntered back on stage for a huge “Bird Song” that lasted over 23 minutes and featured a truly psychedelic jam. “Feel Like A Stranger” was fairly straightforward, but I was surprised to hear a funked out version of the Jerry Garcia Band tune “Cats Under The Stars.” JRAD blasted off on a heavy version of Bob Dylan’s “Tell Me Momma” which made the most of Marco Benevento’s piano and Stuart Bogie’s sax. The bass of Dave Dreiwitz took us into the helter-skelter intro to “Mountain Song” before they closed the show with an appropriate “I Know You Rider.”

JRAD returned to encore with a tear-inducing “Brokedown Palace” featuring Mr. Hamilton on vocals. A rare silence fell over the crowd as they played the Garcia/Hunter classic. This song more than most has come to define a generation of Dead Heads, and JRAD nailed it. There is nothing that this band can’t do. There’s something utterly exciting about that. The future is bright and the music of the Grateful Dead will live on as long as bands like JRAD, Dark Star, and VooDoo Dead continue the traditions that began way back in 1965. I think we’re all ‘…bound to cover just a little more ground.”

Set 1: Why Don’t We Do It In The Road, Foolish Heart, Shakedown Street*, Around & Around, Wharf Rat, Hell In A Bucket

Set 2: Bird Song, Feel Like A Stranger, Cats Under the Stars, Tell Me, Momma, Mountain Song, I Know You Rider 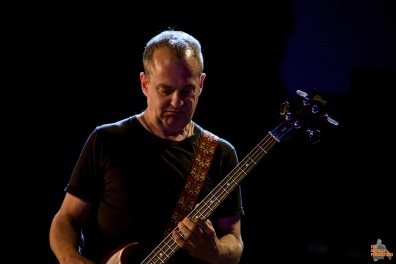