Photos and Review by Max Stewart

Jenny Lewis is indie rock royalty. She has written some undeniably catchy songs that will live forever in the canon of modern alterna-pop, established herself as a bonafide solo artist even after a wildly successful 15 year run with Rilo Kiley, and she just released what is likely the best record of 2019 (and arguably of her career). But there is an intriguing mysticism to Lewis, almost an unassuming charisma that really reveals itself live. When Lewis’ tour rolled into Atlanta in April, she was fresh off of her latest release, On The Line, which was well-represented in her Friday night set at The Variety Playhouse. Despite the album having many deeply-poignant themes (it was released after Lewis ended a 12-year relationship and her mother passed away), the songs all felt very accessible and droves of fan were already singing the words to the openers, “Heads Gonna Roll” and “Wasted Youth.” The downtempo vibe of On The Line is packaged up with a heavy-hitting and defiant spirit, and a touch of Seventies era pop (“Red Bull and Hennessy” and “Hollywood Lawn” have some Carly Simon-esque charm). Sure, there is a raw vulnerability to her new record, but Lewis presents the songs with confidence and grace, and the bulk of the album’s material should be longtime live staples for her future shows. 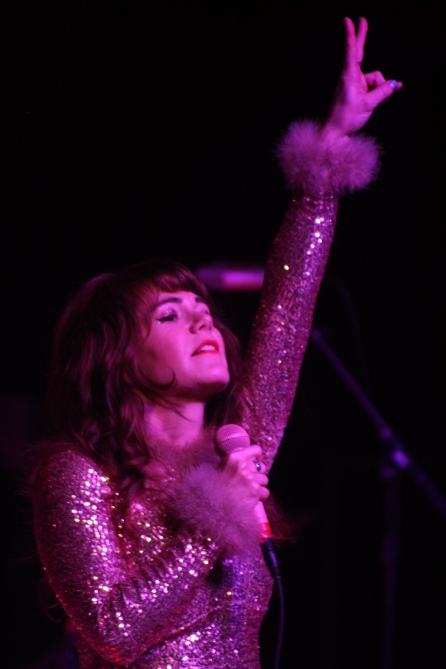 Lewis’ live outfit (sequin sparkle dress) and general laid-back aura (she would occasionally lay on a small heart-shaped bed at center stage) is nothing short of alluring, and there is no arguing that she is a natural born performer. But Lewis commands the crowd’s attention with a powerful ease that feels forced by so many other artists (don’t expect too hear the always-lame ‘I can’t heeeaarr you out there people!‘ at her shows). Instead, the crowd is engaged and attentive while being carried by Lewis’ every note. And even so, there is this endearing ‘aw shucks’ temperament to her stage presence. Her music is cerebral yet danceable, perfectly nailing the indie rock formula. Longtime favorites like “The Voyager” even had a reggae twist, with appropriately green lighting throughout the venue. Towards the end of the night, Lewis played some excitable versions of songs that were off her 2006 collaboration with the opener, The Watson Twins, including “Born Secular” and “Rise up With Fists!!,’ which actually featured Chandra Watson and Leigh Watson as vocalists and synchronized back-up dancers.

In the highlight of the evening, a bunch of large pink balloons were at one point released in the audience at the tail end of the main set and all bounced throughout the venue as Lewis sang an a capella version of the Rilo Kiley tune, “With Arms Outstretched.” It was one of those goosebump-inducing musical moments that is difficult to articulate unless you are there to experience it live: being in a room with a few hundred people all singing the same lyrics, all with their own interpretation of the song and own personal experiences attached to the music. It’s what makes live music such a wonderful form of escapism for us all.

Jenny Lewis is a rare artist that brings together authenticity and bedazzlement. Her new album represents  some of the best material she has released in her career and the songs translate beautifully live.