Photos and Words By Max Stewart

The threat of rain did not curb fans from descending upon Atlanta’s Centennial Olympic Park for the final day of SweetWater’s 420 Fest. An already unforgettable weekend of collaborations and musicianship, Sunday exceeded the hype and was a proper bookend to the weekend’s festivities.

Greensky Bluegrass was met with grey skies on the Sunday afternoon, but their progressive bluegrass set kept the upbeat spirit of the weekend going, including on a tune dedicated to those who have been ‘busted,’ “Jaywalking.” Greensky Bluegrass’ sound is unique in that it does not necessarily follow the stiff rules of traditional bluegrass, but their gritty and spirited show complete with a full light display has moved the genre forward into new and exciting territories. The weekend’s mainstay young guitar virtuoso, Brandon “Taz” Niederaurer, even sat in with for a cover of the Allman Brother Bands’ “Midnight Rider,” on ABB’s home turf in Georgia, marking another highlight reel moment of the festival.

New York’s TAUK were a phenomenal addition to the SweetWater 420 Fest lineup, undoubtedly winning over a ton of new fans in the audience with their eclectic jazz fusion sound at the Planet 420 Fest stage. Drummer Isaac Teel ain’t hiding away in the far back stage as drummers often are, and this is for good reason. Teel is a focal point for the four-piece’s live show, with his fluid mastery of the kit on full display during their set. The band’s dynamic chemistry is held together by Matt Jalbert on guitar, Charlie Dolan on bass, and A.C. Carter on keys; their tight groove won them the respect of musical wizards Umphrey’s McGee in 2014, where they were asked to open for the band. That tour propelled TAUK into the limelight and the two groups clearly stay in touch: TAUKing McGee performed at the Variety Playhouse for an after party in the wee hours of Sunday night. The theme of that show could only be described as a joyous musical party, with Umphrey’s McGee’s Jake Cinninger, Joel Cummins, and Andy Farag all sitting in with band for a set mostly of covers including: “Time” > “Breathe (In the Air)” by Pink Floyd, “Couldn’t Stand the Weather” by Stevie Ray Vaughan, “Voodoo Chile” and “Fire” by Jimi Hendrix, “Sledgehammer” by Peter Gabriel, “Fame” by David Bowie, and “I Want You (She’s So Heavy)” by The Beatles. I can almost see the readers’ jaws drop through the screen as I type this. You’re damn right, it was a good time. When the clocks struck midnight it was officially Teel’s birthday, and it was clear he was in his element as he smiled ear-to-ear throughout the night, leading the crowd in a ‘Soul Clap’ during Stevie Wonder‘s “Superstition.” TAUK’s multiple performances, including with Umphrey’s McGee, were some of the most memorable of the weekend. 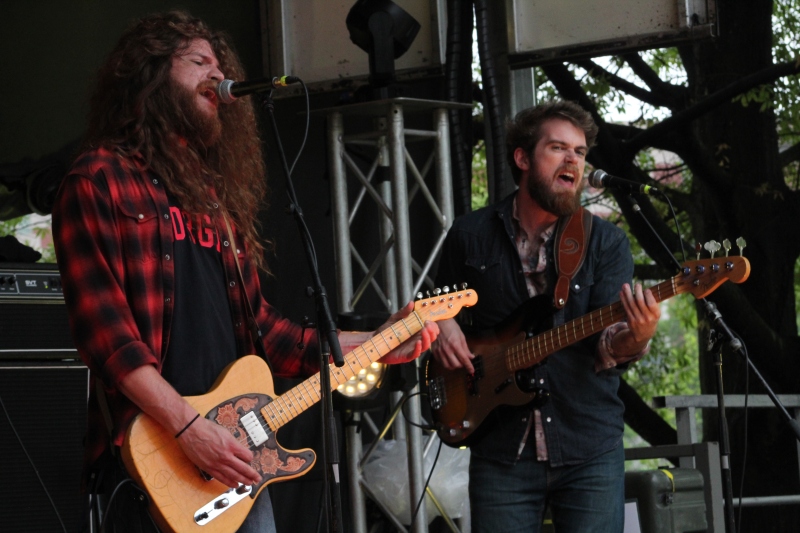 The Trongone Band from Richmond, VA was another top-notch performance, with brothers Johnny Trongone and Andy Trongone ferociously taking a stranglehold on the crowd with their twangy, rootsy Southern Rock. The band has the whiskey-drenched power of Skynyrd and the musical dexterity of The Band, all with a heavy-hitting rock ‘n’ roll swagger. The Trongone Band will certainly be touring the U.S. to larger and larger crowds over the next few years. Singer Andy Trongone was rocking a Georgia tee shirt with his butterscotch blonde Fender Telecaster, and on June 23rd the band will be back in Georgia in good company (Blackberry Smoke, The Marcus King Band) for the Big House’s Annual Summer Jam at Kingsland Farm in Hawkinsville, GA.

You cannot leave a Vulfpeck show without breaking out in laughter at least once. These guys put the fun in funk. They take the music seriously, they just do not put on a holier-than-thou persona as many artist would during a massive festival performance. “We went down to the aquarium and I think we might have spotted a rare specimen,” Stratton declared before the band launched into “Funky Duck” (Cory Wong was later revealed as the funky duck as he snuck towards the crowd in the VIP section for a guitar solo.) “Wait for the Moment” included a Stanley-Katzman vocal scat jam, before the band pretended to be an a capella cover group from Emory University called “Peck-A-Pella” led by Senior Theo Katzman that led into fan-favorite “Back Pocket.” On “Birds of A Feather, We Rock Together” the band “broke it down into the oldest form, the three part harmony,” until the remaining musicians came in to round out the song.

I honestly think that Jack Stratton and company might be trolling the musical audiences of the world in a genius, Norm MacDonald-eqsue fashion. As Stratton wore his Garth Brooks-style headset mic he acted like he was giving a TED talk at certain moments: “Take risks in your career, not in your stock portfolio… We’ve got a lot of exciting products at Vulf Labs, including picture vinyl discs so on the vinyl you can see where to put the needle, very exciting patent-pending products.” Futher evidence of this was his hilariously-bizarre interview on CNBC when Spotify went public. As Vulfpeck was doing their thing on the main stage, Asheville’s The Fritz kept the funk vibe going on the Lyrics & Laughter stage, too. This included a masterful cover of “Black Or White” and a set packed full of their take funk fusion, with a touch of rock ‘n’ roll attitude. The Fritz is another band to keep your eye out for in the coming years.

Umphrey’s McGee could not have been a better choice to close out the SweetWater 420 Fest, especially as the rain started coming down hard on the crowd. Chants of “We want the Umph! Gotta have that Umph!” showed the resilence of the fans to show their “Umph–Love.” The band’s fervent display of musical prowess kept the rain-soaked crowd focused on the music and not the damp and muddy surroundings. Sometimes the rain can add to the mystique and energy of a live show (much like Umphrey’s McGee’s 2014 late night performance at LOCKN’ Festival in Virginia). That was certainly true on Sunday evening, as the band opened with “Half Delayed” and the funk-fueled “Remind Me” from their most recent album, It’s Not Us.

This band’s spectacularly-tight sound moves in many directions over a variety of musical keys and time signatures, and they are truly a group of musicians’ musicians. Seeing guitarist Jake Cinninger, bassist Ryan Stasik, and guitarist / singer Brendan Bayliss with geeked-out expressions on their faces as if they are in a high school band while playing prog-rock compositions like “Mantis” is a contagious feeling for any live music fan. “Atlanta, you guys are heroic,” Bayliss declared to the concertgoers, and the band eventually played Led Zeppelin‘s “Fool in the Rain” before ending their set with “Ocean Billy” and “The Silent Type.” Taz also sat in with the band for a cover of Stevie Ray Vaughan’s “Lenny,” proving that the 14-year-old is beyond musically dynamic as he was seemingly everywhere at once all weekend. It is scary to think about how good of a musician he will be in 20 years. The weather was no match for Umphrey’s McGee and their dedicated fans, and the closing of SweetWater 420 Fest 2018 did not go quietly into the night.

It is almost a cliche live music adage at this point, but “Never Miss a Sunday Show” was most definitely the theme on the final day of the festival, where authenticity, funk, and fun kept the crowd focused on the high-energy tunes and not the lackluster weather.

Full review and photos to follow on Live Music Daily this week!