Photos and Recap by Max Stewart

Armed with just two acoustic guitars, Dave Matthews and Tim Reynolds have the rare ability to captivate a sold out amphitheater crowd during quiet, earnest moments as well as upbeat, energetic grooves.

Dave Matthews wrapped up his acoustic tour with his trusty confidant and Dave Matthews guitarist, Tim Reynolds, at the legendary Merriweather Post Pavilion in Columbia, MD last month. Mostly made up of DMB tunes that were stripped down to an acoustic form, the set maintained the power and emotion that has made Dave Matthews Band a premiere summer staple for years. I’d go as far as to say the minimalist approach of the acoustic show makes some of the heartfelt melodic and lyrical arrangements that much more alluring (see “Granny,” “Cornbread,” “Satellite”).

As the sun set over the Maryland skyline, Matthews and Reynolds played the opening chords to Under the Table and Dreaming’s “Warehouse” and subsequently thousands of called-back “Woos” echoed over the lawn. The duo kept up the high pace while playing most of the fan favorites (“So Much To Say,” “Crush,” & “Dancing Nancies”), with Reynolds seemingly able to out-shred himself at every acoustic turn. Matthews’ voice and complex guitar chords shine brightly in this intimate environment, allowing him to focus on the performance of the song and not be overshadowed by a large ensemble.

It would not be a Dave Matthews show without some hilariously bizarre antics which included holding up some handcuffs on a nearby barstool claiming to not know where they came from before “Stay Or Leave,” or manically proclaiming “Someone just told me I forgot to take my medicine…” while staring playfully into the audience. With only two musicians on-stage, fans get an unfiltered glimpse of all of the stream of consciousness and quirky in-between song scat noises that make Dave Matthews the endearing oddball we all know and love. Reynolds even had an opportunity to showcase one of his solo tunes, the bottom-heavy blues chugger, “Manfood,” as well as a rousing hybrid instrumental cover of “Ten Years Gone” and “Kashmir” by Led Zeppelin.

“I’m sweating just sitting here, Tim hasn’t broken a sweat yet,” Matthews joked as he sat down to sing the new tune “Virginia in the Rain,” an homage to the neighboring state where DMB got their start. Matthews relayed a story about how he was in Portugal with his family and ran into Ben Golder-Novick, otherwise known as Ben the Sax Guy. Obviously they remained in touch because Matthews invited him out to play saxophone on superb versions of “#41” and “Tripping Billies.” The collaborations continued as Dave Matthews Band crew member and recording engineer Joe Lawlor sat in as a third guitarist on the bluegrassy “Cornbread,” where he impressively dueled alongside Reynolds’ echoed, slide guitar parts.

“Now for something completely different,” announced Matthews before the main set ended with the stellar “Satellite,” the powerfully introspective “Grey Street,” the oxymoronic world view on “Funny the Way It Is,” and the always uplifting “Two Step.”

As a longtime Dave Matthews fan who first saw the band at age 13 when my dad took me to see them at Phillips Arena in Atlanta, I have enjoyed watching DMB perform many shows across the U.S., including at festivals and the 25th Anniversary show last year in Charlottesville. That being said, Dave & Tim’s unadulterated performance gives the songs the focus and attention that they deserve, making it a must-see show for any Dave Matthews faithful. There is no doubt that the DMB fan collective must be itching for the band to return to the road after not doing a summer tour this year (present company included), but be assured that this acoustic package hits all of the peak moments of glee fans have come to expect. Considering how successful and well-received the tour was this summer (including a recent announcement of a multi-day Riviera Maya event in 2018), I would bet these two will continue to perform together well into their later years.

Please be sure to head south of the border just after the new year and see Dave Matthews and Tim Reynolds for a concert vacation on January 12 – 14! 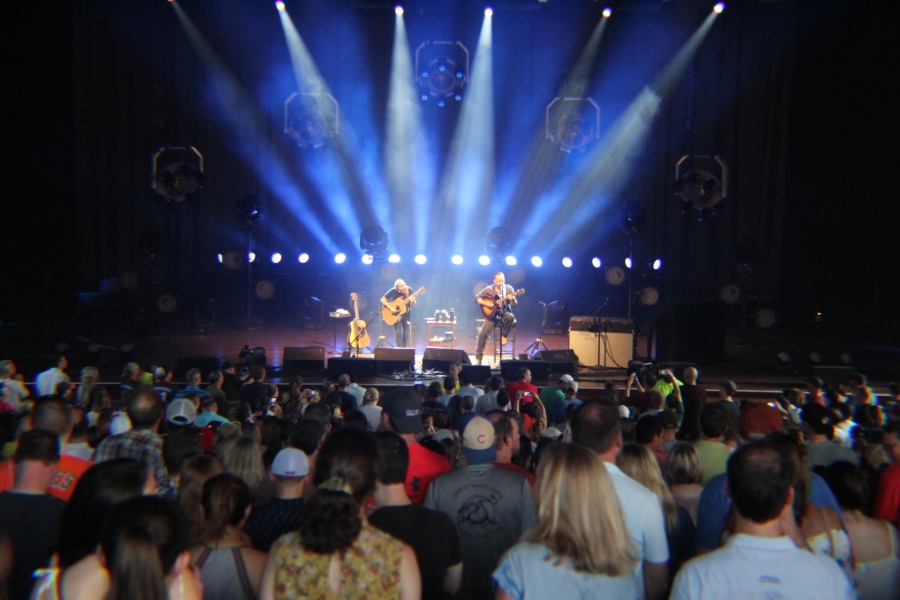