BIG Something is a dynamic yet accessible band, blending Hard Rock, Psychedelic Rock, Bluegrass, Reggae, Funk, Electronic, and even Prog Rock in a complementary fashion. No matter where your musical tastes lie, BIG Something has a little something for you to enjoy.

I got to catch up with BIG Something’s lead guitarist Jesse Hensley when the band rolled through Austin, TX at Stubb’s on 4/20 while on tour with Umphrey’s McGee. Hensley knew Live Music Daily’s late founder Andrew McConnell, who was a major proponent of BIG Something’s music that interviewed Jesse back in 2014 and highlighted his seal of approval: “BIG Something is easily one of the top rising talents on the jam scene in the country and I don’t speak such words lightly”. Andrew was not blowing smoke, he loved these guys and saw major potential in them, and for good reason.

It is touching to know that Andrew’s legacy continues to live on in the music scene, via a band like BIG Something. I’m sure he is gleefully smiling down as the band he admired and promoted continues to progress onward and upward this year: wrapping up a tour with Umphrey’s McGee this Spring, releasing their most ambitious and sonically grounded album to date, Tumbleweed, and playing additional shows across the U.S. in 2017 including FloydFest, Summer Camp Music Festival, and their 6th Annual The BIG What? (a three day festival hosted by BIG Something in their home state of North Carolina which includes Turkuaz, Everyone Orchestra, Zach Deputy, and many others).

MS:How will you remember Andrew McConnell (who you spoke to in 2014)? Any particular stories or conversations stand out? He was a passionate fan that really loved BIG Something and was a huge fan of your guitar style.

JH: Andrew was so passionate about live music. He always had a new story about a band or show he had recently seen, and he could tell you every detail from setlist audibles to what overdrive pedal the rhythm guitarist was using. I really enjoyed the constant flow of videos and tidbits he’d send me from his travels. I am big fan of Andrew.

BIG Something dedicated the song “Passenger” to Andrew soon after you heard about his tragic passing, when you played 9:30 Club in D.C. That was really cool of you guys and a very powerful moment. Was there any particular reason you chose that song?

“Passenger” is a song about how quickly time can get away from us all. It just seemed fitting, I think.

You spoke about guitar tone and influences in your 2014 interview with Andrew. Your guitar sound on the new album Tumbleweed is excellent; there is a spacey, funktified David Gilmour feel to your playing (see “Song for Us”, “Blue Dream”, “Waves”).

Do you put a lot of time into a lead part to really figure it out ahead of time, or do you allow it to organically come together and just use your favorite take? It seems like you guys have again incorporated a live feel into your studio recording, which gives the songs much more substance and depth.

Wow, thanks so much man, I’m a huge David Gilmour fan! We definitely love trying to incorporate the live show feeling into our albums as much as possible. Having a resource like Echo Mountain Recording Studios made many aspects of recording live much more convenient for this album. We generally tend to play new material while touring long before we ever take it into the studio, so there are a lot of solo sections and song structures that are set and worked out. But there is still quite a bit of improvisation between takes in the studio setting.

You mentioned Stevie Ray Vaughan as a big influence on your playing in your early days. How exciting is it to be performing in Austin where he cut his teeth? Have you spent any time here?

It is pretty exciting, and it couldn’t have gotten any cooler, I walked into the venue while Jake [Cinninger, lead guitarist of Umphrey’s McGee] was starting to soundcheck. He was toying with my favorite SRV instrumental called “Lenny”. The rest of the band soon joined in and I got my own little personal show of my favorite song right there in the middle of Austin! With our travel schedule as tight as it was, we didn’t really get to explore the city on this trip. Can’t wait to come back and dive into the Austin culture a bit more.

That is awesome. How excited are you for the rest of the tour with Umphrey’s Mcgee? Are you a fan? Lots of similarities between your two bands, and specifically how you and Jake Cinninger both act as the axe anchor men for your respective bands.

So pumped!! I had listened to Umphrey’s quite a bit, but hadn’t really seen them live other than a couple festivals last year. After last week’s run of shows, I’m definitely a fan! Everyone from the band to the crew excels at what they do and they have been so friendly and inviting. UMPH LOVE!

BIG Something has a similar dynamic as Umphrey’s, where there are 6 talented musicians on stage. How do you communicate effectively in a live setting to maintain control with so much going on? Visual cues? Is that ever difficult to deal with as a guitarist?

That’s a great question (laughs). With most of the band wearing in-ear monitors these days, it makes things nice. Our sound engineer and lighting designer Cameron Grogan has started setting up a talkback mics for [singer / guitarist] Nick [MacDaniels] to communicate with everyone during the set, so it makes calling setlist audibles and song changes a lot easier and more efficient. There are still a fair amount of winks, nods, and a lot of telepathy with what we do on stage though. 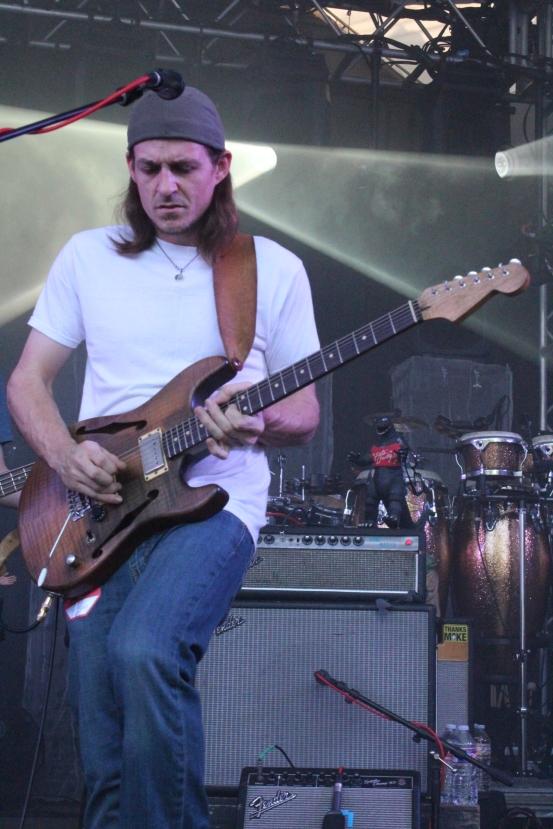 BIG Something is a band that is really hard to categorize. This remains true on Tumbleweed, which has undertones of many musical genres including Psych Rock, Reggae, Bluegrass, and Electronic. The many sonic influences in the band’s sound makes you guys really unique, is that a product of everyone’s diverse music tastes and the desire to incorporate a range of genres into your sound? I know you mentioned you learned on acoustic guitar while jamming bluegrass with your dad growing up, so maybe that seeped in there somehow?

I definitely think that our diverse musical backgrounds have a lot to do with our sound and how we write music together. We are all constantly influencing each other and playing new music we’ve found for one another while traveling on the road. Yeah, I started out playing a lot of acoustic guitar when I was 11 or 12 and got my first electric when I was 14 or so. I think the first song I ever learned to play in it’s entirety was Johnny Cash’s cover of Tom Petty’s “I Won’t Back Down” (laughs)!

What is it about BIG Something’s longtime album producer John Custer that just clicks for you guys?

John has an amazing musical mind and hears things sonically that we can’t hear sometimes. His ideas and suggestions always take our songs to new levels and add new layers and depth to our music.

Any guitar part or song on the new record (or in your greater catalogue, too) that you are particularly proud of?

I’m really proud of everything we all have created together but “Julia Brown” off of our 2013 self-titled album will always stand out as one of my favorites.

You mentioned you were working while back home in North Carolina in between tour legs. Were you doing woodworking in your dad’s shop (per LMD interview in 2014)?

I do love crafting and building things in Pop’s wood shop, but while off the road I stay pretty busy repairing instruments at Shomaker Guitars in Burlington, NC.

Very cool, that skill must come in handy while on the road. Lightning round to wrap things up, so we can get to know your influences a bit better. What are you listening to these days?

You’re stuck on a desert island and have only 3 records to listen to the rest of your life – what are they?

Great answer. What’s the last live show you saw that blew you away?

For those that are new to BIG Something, what would you point to as the best entry point into the band’s catalogue? Beyond just seeing you live…

I’m a music nerd so I’d say start at Stories From The Middle Of Nowhere. Tumbleweed is a great place to jump in and see who we are and where we are currently as a band though. Also, COME SEE A LIVE SHOW!!!

You heard the man, go out and catch Big Something on tour!