Thunder and a bit of a Southern summer storm, which became a daily occurrence, welcomed the 2016 edition of FloydFest. After a short time the blue skies returned to this beautiful site held right off the Blue Ridge Parkway just outside of Floyd, Virginia and patrons could finally hear the first notes of music of the 15th iteration of this summer classic. Held from Wednesday July 27 to Sunday July 31, 2016 the event saw performances from well known names such as Warren Haynes, Bruce Hornsby, Railroad Earth, Nathaniel Ratliff and the Nightsweats, Anders Osborne, Greensky Bluegrass as well as up and comers like Con Brio, Dead 27s and The Hip Abduction among many others.

The festival’s first day is reserved for VIP and 5 day ticket holders and saw performances by some of the smaller bands and offered a chance to get settled into camp and get into the spirit of festival living.

Hosting six stages for music plus 3 more for arts and dance performances, there was something for everyone. The smallest of the stages, the Ferrum College Workshop Porch, is fashioned as a wood cabin front porch and has in the past seen performances from Jason Isbell, Ben Sollee, Larry Keel, and Jerry Douglas and Peter Rowan. With room for just a couple of hundred fans the intimate venue kicked off on Thursday with a performance by jam grass stalwarts Railroad Earth. The show was made even more special by the appearance of Niger-born Tuareg guitarist Bombino. Joining the band on an otherworldly version of RRE’s “The Cuckoo,” he stepped into a band he never before played with and added a flair and exotic layer to a song that is haunting on its own. Sit-ins such as this would become a theme at the festival, both by choice and by necessity.

Anders Osborne took the main stage later that evening and played like he had something to prove. Right out of the gate the blazing guitar, expressive bass and New Orleans swagger put the crowd on notice: Anders came to play. He repeated the performance the next afternoon and didn’t hold anything back at either show. But Mother Nature had her own plans Thursday and unleashed a thunderstorm towards the end of his set that sent patrons running for cover and forced the music to end. But the party continued unabated backstage in the VIP tent where Rhode Island band, Cactus Attack entertained a captive audience with a raucous, high energy Americana set. But as the rain ended, Railroad Earth took the main stage and played a well received set that included some feisty bluegrass and some long-form psychedelic jams. While RRE was delayed about an hour and a half, Nathaniel Ratliff and the Nightsweats went on right on schedule to a jam packed Hill Holler stage. The very personable Ratliff led his band through a tight set of rock-n-soul numbers from his new album, ending the set with what is becoming his go-to closer “SOB > The Shape I’m In”.

Friday saw the return of the sun and larger crowds. FloydFest gives guests many options besides music. Every year there is a Healing Arts village where practitioners of massage, reiki, acupressure and other alternative and complementary therapies can help the festival-goers. When you can lay in a shady tent with a fan on a hot day getting a fantastic massage while listening to Charleston, SC’s Dead 27s, it’s a pretty good day. Touring in support of their debut album they played a well attended set on the Hill Holler stage.

Each year FloydFest hosts a competition called “On the Rise.” Bands compete for a microphone package, cash and a main stage slot the following year. Memorable bands to look for were Feel Free and Blind Owl Band. But the stand out for me was St. Petersburg, Florida’s The Hip Abduction. Their first set had the Pink Floyd Garden Stage packed for an afternoon show that brought electro-tropical vibes to the people and the next day they filled the backstage VIP stage to capacity with a crowd so enthusiastic it may have surprised the band a little.

As the evening came, the Wood Brothers took over the Dreaming Creek Main Stage. As always, Oliver Wood’s smooth vocals coupled with brother Chris’ jazzy bass lines had the crowd dancing as the temps of the day broke and a cooling breeze began to blow.

The full field was packed with screaming girls as headliner Nahko and Medicine for the People walked onstage. Wearing a “Make America Native Again” hat, the charismatic Nahko Bear led his band through a set of music that sounded like a combination of Michael Franti and John Butler Trio and put on an energetic performance. The fans in attendance surely appreciated the show. 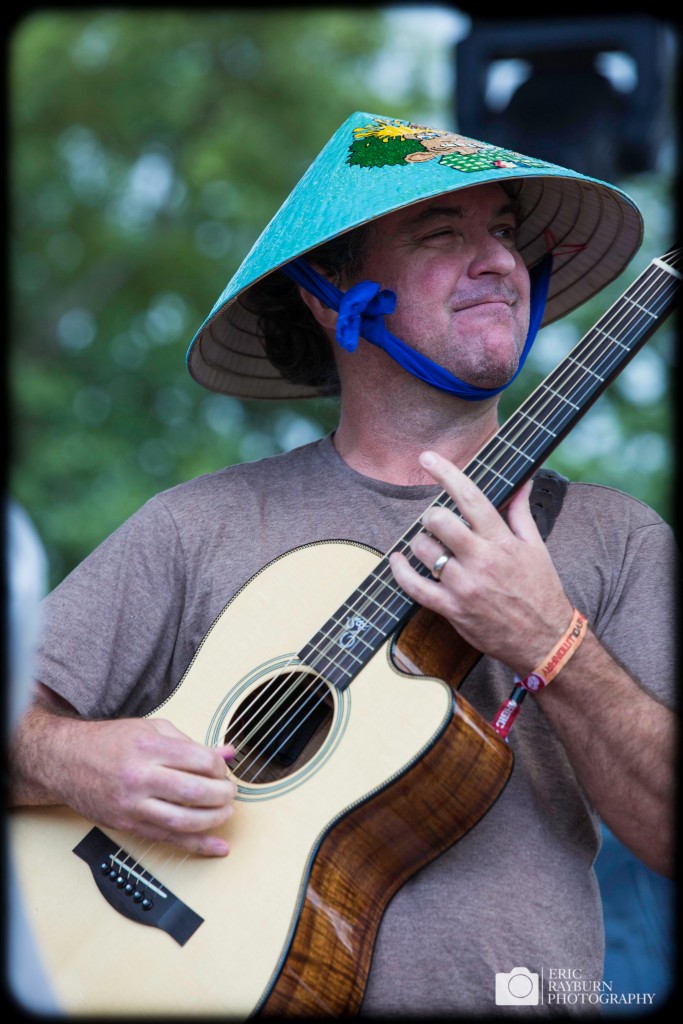 Saturday started with an early thunderstorm just before the solo set from Keller Williams, but while the skies cleared into a clear and hot afternoon, the real thunder came at about five o’clock that day when it was announced that festival headliner Gregg Allman had cancelled his performance due to illness. While he had cancelled his previous night’s appearance at Greenfield Lake Amphitheater in Wilmington, NC, it appeared the illness had worsened and Allman was admitted to the hospital in nearby Roanoke. But in what was a major lemons to lemonade moment, husband and wife festival organizers Kris Hodges and Erika Johnson worked up a supergroup dubbed Leftover Salmon and Friends that would play that evening in the slot vacated by Allman. 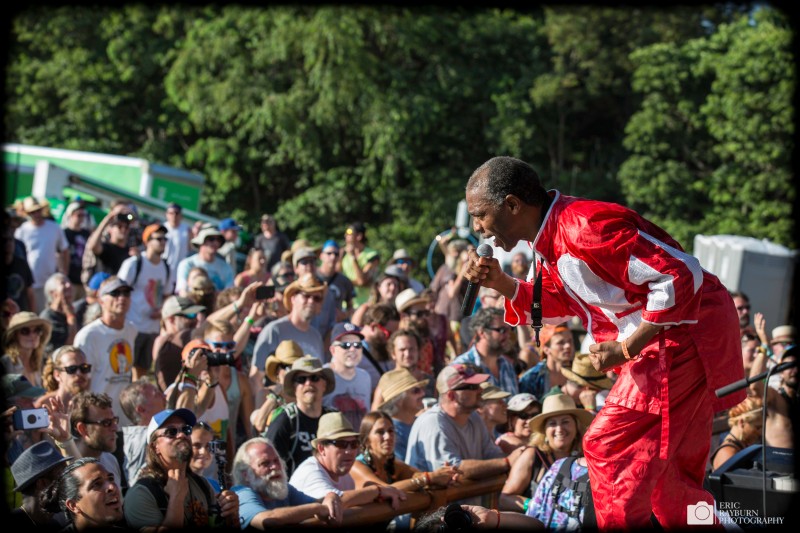 Sometimes music can come to you at just the right time and as the late July sun baked the festival grounds, Femi Kuti and Positive Force came to FloydFest. Bringing a 12-person stage show, throbbing African rhythms coupled with powerful lyrics, Femi, his dancers and band performed what felt like an exorcism of the bad news of the day where the drums’ beat and the heat and all of the negative energy held within were released onto the altar of music. The 57-year-old bandleader and his dancers were in near constant motion throughout the set. It was a cathartic experience and when the show was over there were many smiles on many sweaty faces. Politics and music run together in the Kuti family and Femi, the son of Nigerian Afrobeat pioneer Fela Kuti, took the time backstage to ask about local politics and regional views on national and world issues. Although he mentioned his pressing issue was getting to sleep in his own bed as this was the final stop on his U.S. tour. 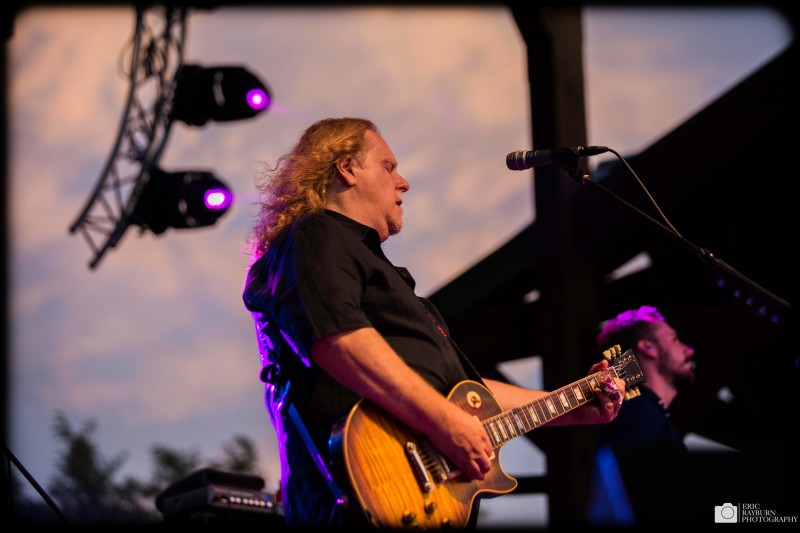 Warren Haynes followed on the main stage and along with his Ashes and Dust band. Playing against an amazing Virginia mountain sunset the set looked toward Roanoke and further toward Macon, Ga as the former Allman Brothers Band guitarist played a set peppered with Allman tunes including “Jessica” and a 20 minute “Blue Sky” while working in a cover of Radiohead’s “Karma Police”.

But the highlight of the evening was the Leftover Salmon and Friends. The band consisted of Salmon along with Keller Williams, Larry Keel and members of Monophonics, T Sisters and Elephant Revival. The set was very well received by most patrons. While many I spoke with expressed disappointment in missing the Rock and Roll Hall of Famer and all were concerned about his health, everyone said the set, dubbed the “Buffalo Mountain Jam” in honor of the iconic Allman Brothers Band tune “Mountain Jam” and nearby peak Buffalo Mountain, was a great treat. Festival personnel have already discussed making a similar super jam set a part of next year’s event. The set ended with a nice jam into a great bluegrass “Whipping Post” in yet another nod to the ailing Allman.

But the evening wasn’t over as searchlights appeared in the sky leading to a “kinda secret, kinda not secret” forest stage. The newly constructed stage was a cheeky nod to what had been a FloydFest confusion for years. The number of the festival was one off from the year, (i.e., Floydfest 14 was in 2015, 14 was in 13, etc.) so to make it easier, organizers named this year number 16, skipping over number 15. This special show, hosted by the Pimps of Joytime, was to function as number fifteen. The Pimps played their electro-funk, flanked by fire dancers from PLF and projected designs, until the early morning.

Sunday was a perfect complement to the day before as bluegrass 80s cover band Love Canon started the day off right. The Larry Keel Experience debuted new member mandolinist Jared Pool, who replaces banjo player Will Lee who had some recent health issues. Pool brings a different sound to a band that had a mando player before Lee and adds a higher toned voice to Larry’s growl. I can’t wait to see how well they gel and the jams that are in store for LKE fans.  Greensky Bluegrass, fresh off of selling out Colorado’s Red Rocks Amphitheater, had a field of dancing campers ready to get down. The band was obviously enjoying themselves and brought on surprise guest Bruce Hornsby to play accordion on “Ain’t no Bread in the Breadbox.”

Hornsby closed out the festival along with his band of Noisemakers. Playing songs old and new, the famed piano player also played accordion and dulcimer alongside the strong guitar work of Gibb Droll. It was a great set to close what was a fantastic festival.

Each year this special place in Southwest Virginia brings together a specific tribe of people, encompassing all ages, races, sexes and people from across the socioeconomic spectrum. These people have consistently shown themselves to be some of the most positive and grateful folks I’ve seen at festivals. While recognition of the work done by Across the Way productions has begun from press outlets as large as Time magazine, I believe even Hodges and Johnson will acknowledge that without these special people who attend, the festival wouldn’t exist. As Johnson said from the stage in closing the event for another year

“Find your tribe y’all, and love them hard.” 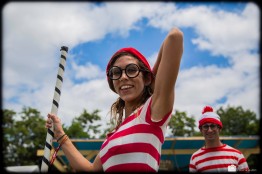 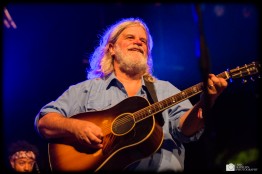 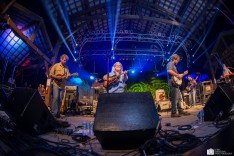 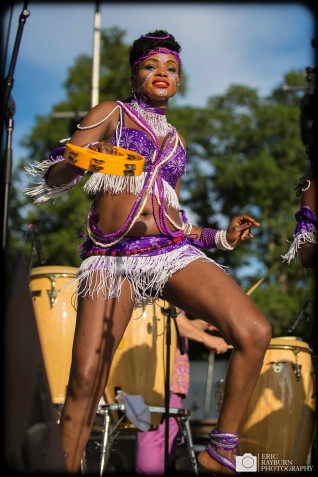 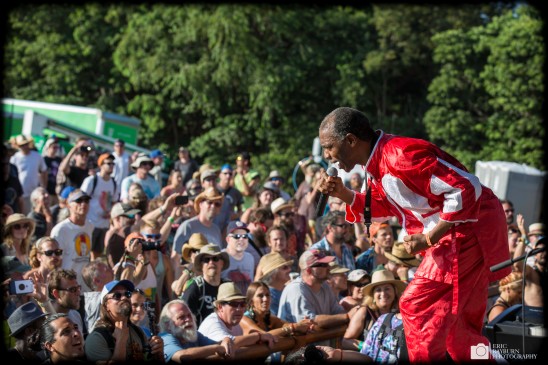 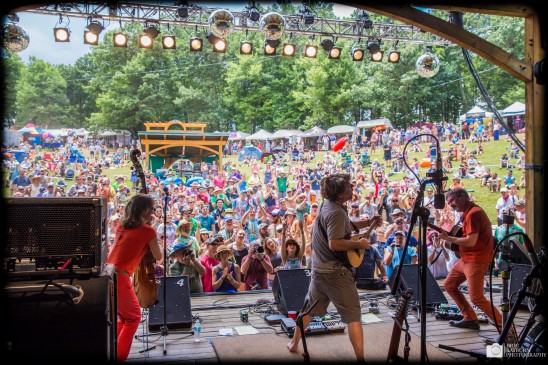 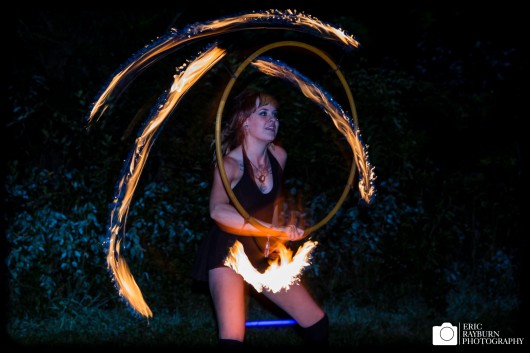 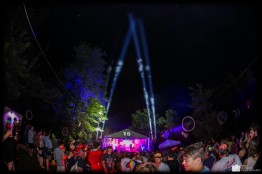 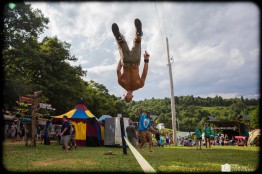 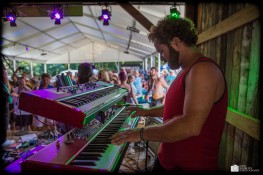 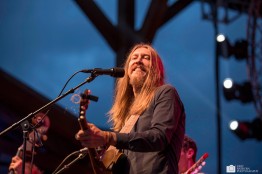 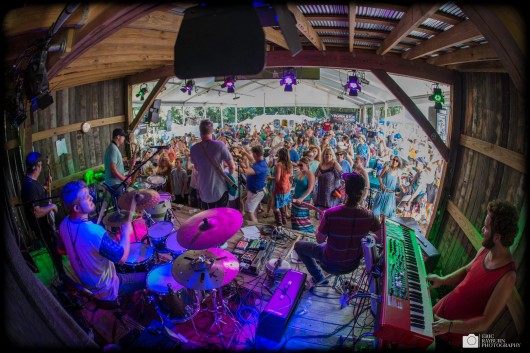 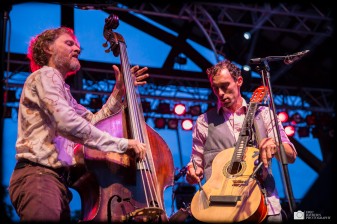 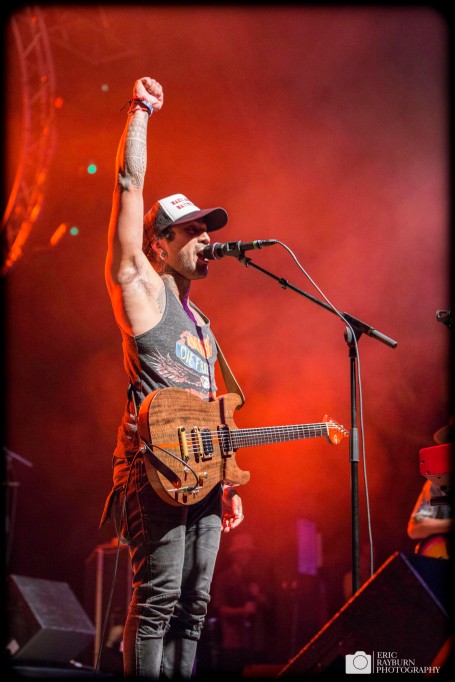 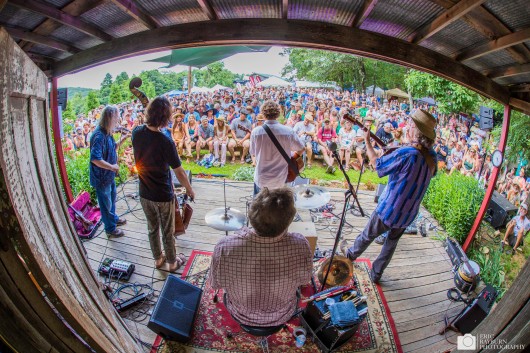 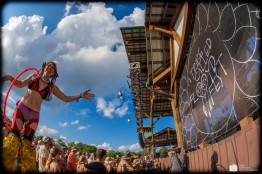 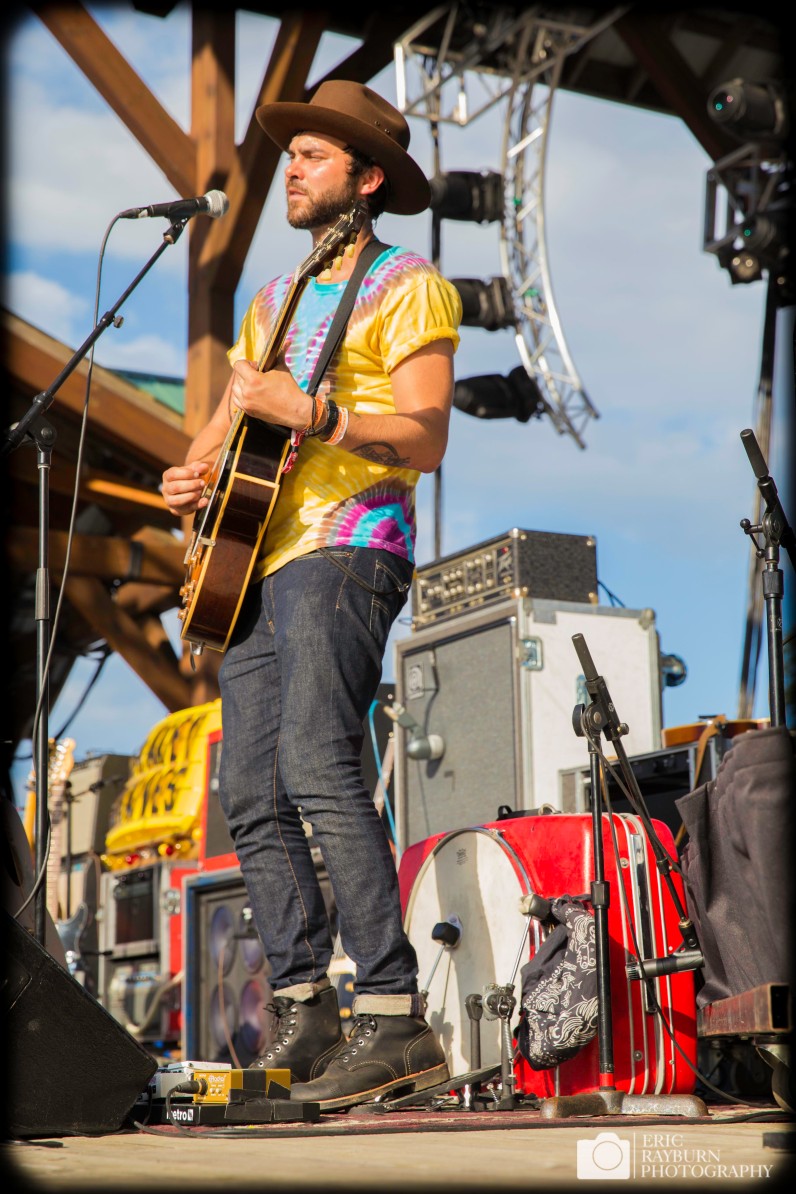