By Randolph Infinger • Photos by ShowLoveMedia

Returning to Hotlanta for the first time in 5 years (11/26/11-11/27/11), The String Cheese Incident brought the heat to Chastain Park Amphitheater; and so did mother nature. Heavy but short-lasted rain delayed the rightfully named “Independent Incident” for 30 minutes before the first night, but clearly had no impact on the energy emitting from the venue. Kyle Hollingsworth (keyboard) began the show with a high flying Close Your Eyes, followed by Doin’ My Time that is sure to make you groove. Michael Travis (drums) and Jason Haan (percussion) ramped up the set after an calm melodic start to Betray the Dark, transitioning to a beautifully interluded Xai Xai in which Bill Nershi (guitar) and Michael Kang (guitar, violin) build and flow off one another. A crowd favorite Rhythm of the Road set the mood for the live debut of Stop Drop Roll, a funky dance tune sure to become a favorite of the Summer 2016 tour.

An electric and hypnotizing Bumpin’ Reel began the second set, followed by a well placed Dirk and lush Windy Mountain. With the sun slowly setting in the background, the band went into a heavy instrumental section with their Four Five Jam, followed by Freedom Jazz Dance. An 18 minute long Shine highlighted the work of lighting designer Andrew Cass, as he filled the surrounding trees with mesmerizing light. The Rolling Stones Sympathy for the Devil was instantly recognized by fans with Jason Haan pounding the bongo, followed by Kyle Hollingsworth’s set closer “Rosie” that had the crowd screaming and dancing their hearts out. Restless Wind sat in the encore position with banjo and guitar virtuoso Tony Furtado sitting in, and made for a perfect ending to a sweltering night one. 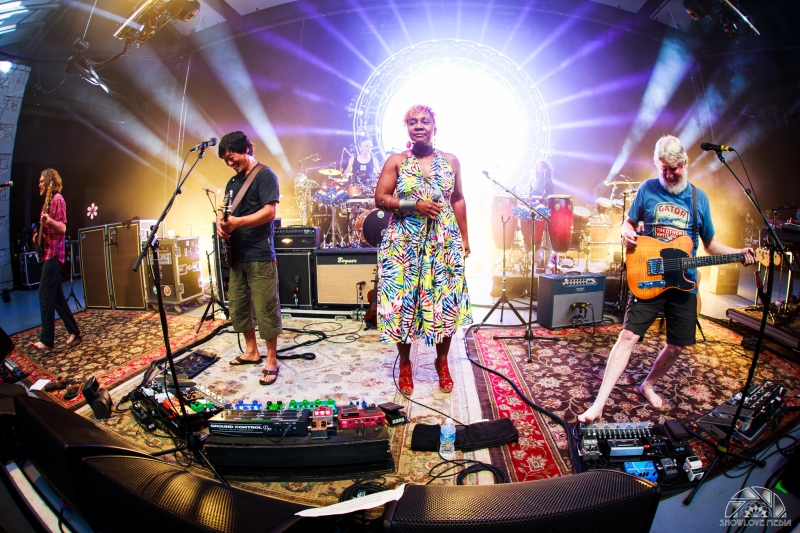 Night two, and subsequently U.S.A.’s birthday began in the same high energy fashion with the bluegrass jamValley of the Jig, Got What He Wanted, and the ever so popular Sometimes a River. Turn Around and Smile made headway for the entrance of Rhonda Thomas, delivering an incredibly soulful Signed, Sealed, Delivered I’m Yours Stevie Wonder cover after an uplifting Smile. Following this first set Rhonda continued on stage, and to the crowd’s surprise and bewilderment helped debut the Vulfpeck cover Funky Duck. Obviously the band was in full swing at this point, and delivered Outside and Inside off of their 2001 studio album. Hotlanta by The Allman Brothers Band was well received by the Georgia crowd and seemed appropriate, as the heat continued to stay in the high 80s throughout the night. Continuing with the party, Let’s Go Outside had Chastain Park Amphitheater swaying, building towards a Independence Day encore. Black Clouds closed out an amazing 4th of July weekend, followed by a rendition of America the Beautiful that claimed many high-fives and hugs all around. The south certainly enjoyed this holiday treat, and hopefully this short succession of shows will pave the way for more extensive Cheese touring in the future.

Set 1: Valley of the Jig, Got What He Wanted > Dudley’s Kitchen, Sometimes A River, Turn This Around > Smile, Signed Sealed Delivered (I’m Yours)* %