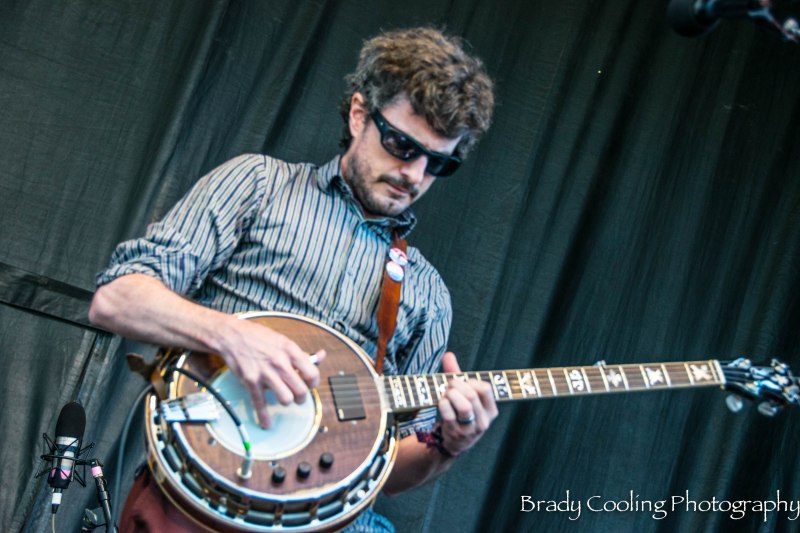 Grand Ole Ditch is: Ryan Hohing on guitar, Jacob Mathews on bass, his brother Lucas Mathews on mandolin, Craig Miller on banjo, Jody Mosser on dobro; “Fiddlin’ Ray” Bruckman on the fiddle of course and lastly Todd Hocherl on drums. They are a band I was not familiar with until last year right before Charm City Bluegrass; a friend named Bill Rudd told me about them and how I shouldn’t miss their set there at all, and boy was he right! They are an up and coming breed of Maryland bluegrass hailing from Mountain Country in Cumberland, MD! The origin is unknown, but we are certain they started at Delfest during some sort of late night campground jam session and the rest is history! With their newest studio release “Unwind” being released fully to the public Friday May 27th right as they take the stage at Delfest, I could not think of a better time or band for this to happen to! The magic of Delfest is truly in the air, and Grand Ole Ditch is a huge part in this years festivities!

The title track “Unwind” has a very festive opening that almost resembles a person walking into a crowd or bar that symbolizes the lyrics sung by the soulful voice of banjo picker Craig Miller. A tale of a person who has been working his tail off all week and all he wants is the weekend, and well: being able to “Unwind.” The chorus picked up by the rest of the gang, “I’ve spent all my week in a box and a seat, just waiting for my chance to unwind,” shows how anxious this person is to be done with work; and I bet how most people feel about Delfest and Ditch finally getting this album completed! It is a really fun and easy song to listen to as it slowly builds directly into the next track “Whipporwill” that without a beat transitions into it so precisely; a very live quality to the album thus far. Mandolinist Lucas Mathews picks up the lyrics for this tune with a very quiet tone as it slowly builds into a really melodic solo and chorus and “Fiddlin’” Ray Bruckman saws on the fiddle as the rest of the band joins and trades off licks and lyrics. These are two songs I am very familiar with live and two of my favorites that have grown on me.

Ditch’s talent as a band is shown just in the first two songs with their songwriting, musicianship, and being able to switch off parts in songs with ease! Crucial for any bluegrass band is a really fast and great instrumental, written by Jody about his pet cat! Which is delivered in “Chester’s Breakdown” each member gracefully whizzes by this song with a quick and tight solo in which they once again show off how masterful they all are as an entire unit. Banjo, mandolin, guitar, fiddle and dobro get their turn to shine throughout the song and they do not miss a beat.

I need to mention Todd on drums who is the literal beat of the band and how much I love drums in a bluegrass band being a drummer myself; it really keeps everything flowing and a grooving! I can only imagine myself bouncing around the field of Delfest to the beat of this song!

Next has Jacob on bass singing backup for Craig on “Pick Me Up” about someone who is clearly having a rough time with a relationship; like any bluegrass set it has to include some sadness and love troubles.. Surprisingly, the tone of the vocals and the instrumentation seem to paint a different picture that underlies the real meaning of the tune and creates an almost optimistic sense for the future.

In “Long to Come Home to Thee” is the opposite of a sad love saga; the dobro from Jody creates a twangy-Western-swing-grass feel to the opening notes and flashes back to the days of the Wild West in my imagination.

“Fiddlin’” Ray enters this dynamic vocal group with his first lead song of the album with some killer words as well as notes played on his fiddle. In another event of firsts; Todd entertains his first drum solo that is played nicely with some brushes as the song concludes and the day is done.. Next up, is “Kettle Copper Coal” which plays really kicks ass from the get go; Todd eases in with his drums and then it instantly picks up to some really intense and fast bluegrass! The harmonious vocals weave in and out of this number, but it really displays some clear sounds of rock and roll and modern progressive bluegrass.

To build with the spirit of rock and roll, “This Time” enters the world of bluegrass with a very electric and amplified sound that is simply put as dynamic and electric! Jody’s dobro is the shining star of this song as the electricity and swiftness of his sound just winds through each part of the song and adds a very cool sound to it.

This shows how Grand Ole Ditch can rock out their style rather then sticking strictly to bluegrass; all about the evolution and progression and building influences and unique sounds off of one another! I must touch back on how each song shows how phenomenal they are with their instruments as well as their voices; they truly are a “real” band!

Taking the reigns again is another bluegrass instrumental entitled “Dragon’s Breath” each member becoming their own “dragon” and taking lead to a solo followed by some very melodic and almost Celtic/European sounds to the musical selection. Another fantastic song on this album! Ditch slows down things a bit for a slower and more twangy track, “Baby Jane” with Jody Mosser back on lead vocals. This song brings back that good ole Western feel with some jazz influences led by Jody on the dobro, damn how good he is!

More solos from each band member to round out this track. And now to the finale: “Foolish Pride” the ending of “Unwind” and boy is it a good one, they did save the best for last! Craig Miller takes this final song on with some quick banjo rolls and lyrical flow; continuing the theme that Ditch has created: harmonious vocals, fast instrumentals, and being a well oiled machine as an overall band!

With all of that being said, I encourage everyone to go and check out Grand Ole Ditch this year at Delfest on Friday and Sunday early in the festival days and buy their newest album, “Unwind” which comes out Friday in all platforms! They are the best bluegrass band you haven’t seen yet, and I know they will make a new fan out of you! So come out and see the hometown boys this year in Cumberland, and thank you to the band for letting me get a sneak peak of the album and express what it is exactly in words! Del-Yeah! Ditch-Yeah!