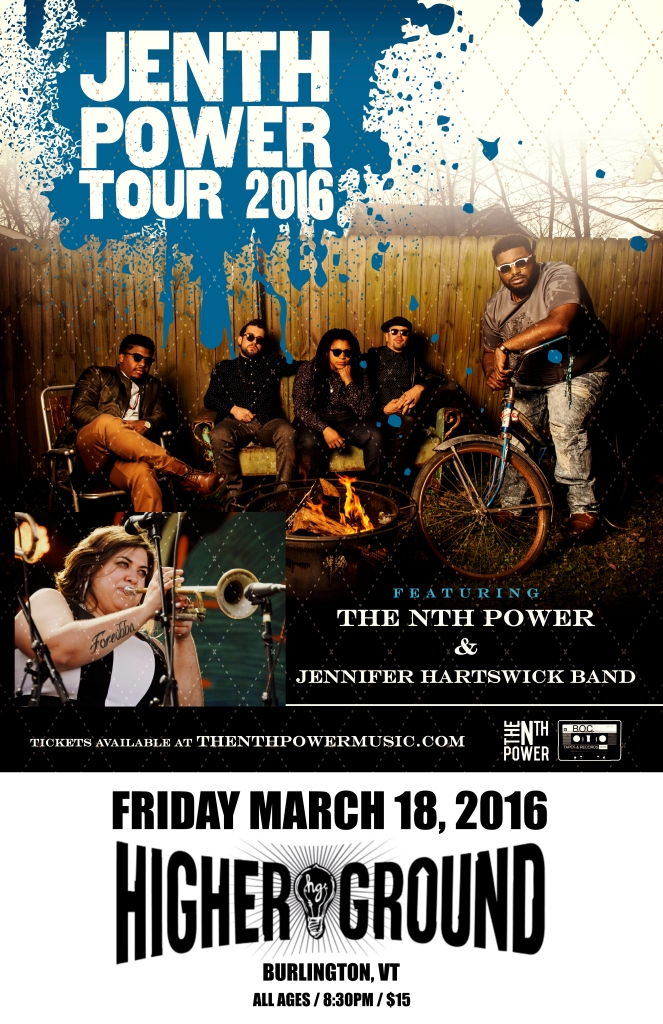 We are pleased to team up with our friends at Higher Ground to offer fans a chance to win a pair of FREE TICKETS to the JENTH Power show this Friday (March 18) at Higher Ground in Burlington, VT. Tickets for the event are available for purchase here ($15).

To enter for a chance a pair of free tickets to the show simply visit our Facebook Page. “Share” this article and “tag” a friend in the comments to enter the contest. Or simply fill out the form below.

Proving that soul music can be exponentially greater than the sum of its parts, The Nth Power is on a mission to share the light. Formed during an impromptu late-night jam at Jazz Fest 2012 in New Orleans, the relentlessly funky and soulful band believes in music as a higher power—tapping into an energy that is simultaneously sexy and spiritual, with songs that will inspire audiences to dance, groove, make love or just stand there with goose bumps.

Jennifer Hartswick is one of the most exciting performers in music today. She inspires audiences all over the world with her powerful voice and commanding trumpet playing. She exudes confidence and joy and brings her own refreshing spirit to the stage every time she performs. Jennifer’s music is honest, soulful and comes with a maturity far beyond her years.

Jennifer’s live performances are renowned as spontaneous, joyful and contagious. Her natural charisma and sincerity shines through, and each performance is a celebration of musical collaboration; the camaraderie between Jennifer and her band mates is always visible. And whether she is wailing on the trumpet or singing an intimate vocal solo, her performance is all part of a single seamless instrument, one that is played not only with astounding technical proficiency, but also with sensitivity, conviction and heart.

Born in Vermont into a musical family, Jennifer began playing music at the age of four. As a teenager she became infatuated with the sounds of Oscar Peterson, Clifford Brown and Ella Fitzgerald. She lived and studied in New York City before attending the Hartt School of Music in Hartford, CT, where she studied the intricacies of the jazz idiom with Jackie McLean, Nat Reeves, Steve Davis and many other prominent jazz artists.

At the age of 20, having already recorded on two albums with Trey Anastasio (Story of the Ghost, Phish, 1998, and One Man’s Trash, Trey Anastasio, 1998), Jennifer was asked to join Anastasio’s new band. She has been an integral part of the band for the last ten years touring internationally and sharing the stage and studio with such legends as Carlos Santana, Dave Matthews, The Rolling Stones, Tom Petty and Herbie Hancock. She has also appeared on The Tonight Show with Jay Leno, The Late Show with David Letterman, Late Night With Conan O’Brien, Austin City Limits, and many more.