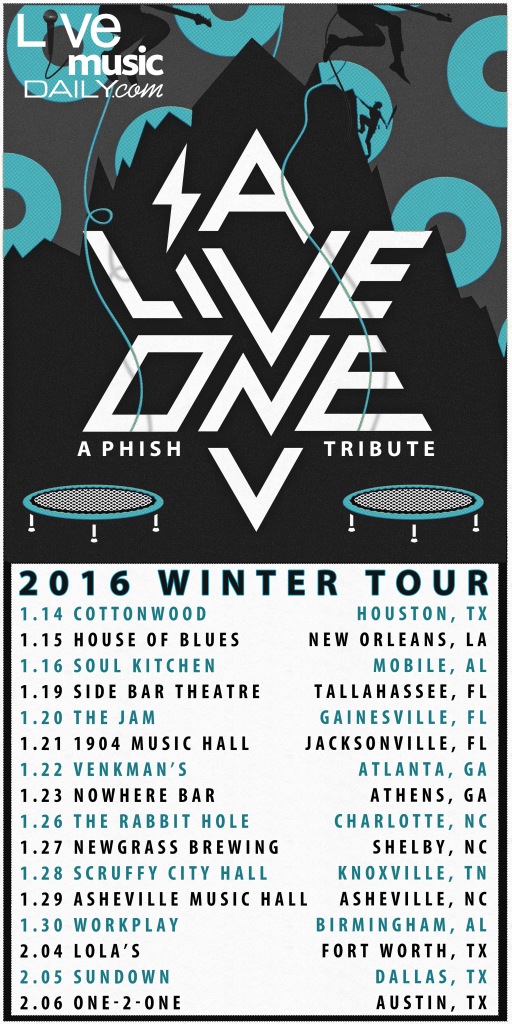 A Live One serves the music of one of our favorite bands live, the music of Phish. There are some fun tributes out there, but our friends we met in Texas a few years ago, A Live One, put on one of the most authentic shows you’ll see. Josh Pearson is a fantastic guitarist and fully embraces the sonic energy of Phish, particularly their emphasis on crafty improvisation. The band weaves together well thought-out setlist just like the band. You have to see it to believe it. They go above and beyond to replicate this catalog.

Phish tribute, A Live One, has just announced its 2016 winter tour;  a 16 show run making its way through the South and Southeast. The tour kicks off in their home state of Texas and continues through Louisiana, Alabama, Florida, Georgia, North Carolina and Tennessee, hitting staple venues such as House of Blues, Soul Kitchen, Asheville Music Hall, Scruffy City Hall & WorkPlay to name a few.

A Live One has been performing the music of Phish since 2011, with nearly 200 shows under their belt and several venues on their list.  They have played several notable festivals including: Phases of The Moon, Highberry, Euphoria, Art Outside, among others and have even thrown 2 of their own, Phish-esque festivals, The Barber Ball & The Grego Went.  The band has continually toured the country, something unique among the Phish Tribute bands, making it as far north as Higher Ground in Vermont in March of 2015 to get a taste of where it all began.