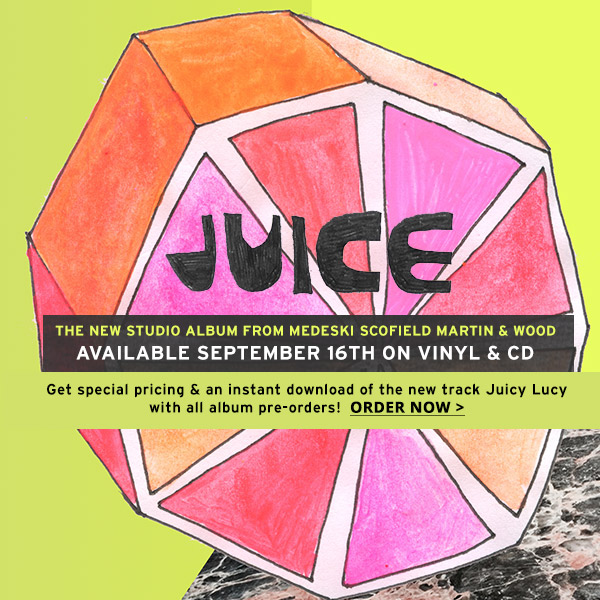 Medeski, Martin & Wood (MMW) has been the world’s premier jazz trio since its formation in 1991, featuring John Medeski (keyboards), Billy Martin (drums) and Chris Wood (upright bass). Throughout its almost 25 year career, the trio has frequently collaborated with guitar aficionado John Scofield, whose own prolific career spans almost 40 years, to form the quartet known as MSMW. Reaching for influences from every possible end of the jazz spectrum, MSMW’s unique, avant-garde take on jazz and funk has skillfully crossed over boundaries into many different live music scenes, from rock and jam festivals to classy European concert halls. The quartet’s latest studio effort, Juice, sees the group in top form as they run flawlessly through a combination of experimental covers of classic songs and groovy new original tunes.

To start off the album, the band took a classic jazz tune, “Sham Time” by Eddie Harris, and put a classic MSMW groove to it. Immediately of notice is their seasoned veteran control over the dynamics of the song. Scofield shows right away why his addition to the group brings a whole new life to the music. Medeski throws in his own reminder of why he’s the king of the keys, and Martin and Wood seem to be inside each other’s heads, never breaking stride, a theme that would continue throughout the rest of the album. “North London” is the first original track of the album, featuring masterful finger picking from Scofield and simple but catchy lead lines from Medeski. Wood links up with Scofield seamlessly leading the bridge. “Louis the Lifter” brings out a bit of a samba or Latin jazz feel. Medeski utilizes tactful dissonance in his chord work throughout, creating a sort of tension that doesn’t necessarily feel out of place at all.

“Juicy Lucy” has more of a laid back, island feel. The slower tune is based more on drums and percussion, giving Martin a chance to shine with crafty intro and bridge sections. “I Know You” keeps the laid back groove going, but with a much darker timbre, keeping the mood of the album interesting. “Helium” picks up the pace again with a smooth but funky bass line from Wood and a steady, unwavering groove from Martin. Next, the band brought out a lovely cover of “Light My Fire” by The Doors. Scofield took the lead part of the intro on guitar, but Medeski still got a chance to belt out a solo on keys.

Another cover, “Sunshine of Your Love” by Cream was almost unrecognizable, with its slow, downtempo reggae beat. Once you pick up on it, it is clear how truly clever this version is, a wide, stretched out tune with almost 11 minutes of hypnotic, minimalistic tones and effects. “Stovetop” is an original track with a very traditional feel that put me in that old jazz night club mindset. Wood is featured on this tune with a nice upright bass solo. Finally, the album ends with a beautiful cover of “The Times They Are A-Changin’” by Bob Dylan. The band presents a slow, melodic take on this classic song, and Medeski’s keyboards are on an organ setting, making the song sound like an ode or hymn.

Overall, as if we could possibly expect any less from this quartet of jazz masters, Juice is a terrific studio effort to add to the quartet’s already legendary body of work. Everything is tight and together, yet loose enough to feel relaxed and natural. The chord work and movement between all of the instruments are absolutely stellar, and that innovative, experimental feel that takes us just enough out of our comfort zone to feel a little weird, but not lost, is ever present throughout the album. MSMW has certainly lived up to their expectations, and they continue to be the leaders of today’s jazz scene.