Consider Slightly Stoopid the Jon Snow of Reggae Rock. As respected leaders of the house of San Diego, they nobly defend the wall of So-Cal sounds in an effort to unify the musical kingdoms under the righteous, Rasta Rock ‘N’ Roll way.

Or, for the non-Game of Thrones fans, Slightly Stoopid have taken the reigns as Reggae Rock’s champions of the summer tour circuit. Their recent tours have been a gateway to a lot of excellent new music by bringing up-and-coming bands on the road, and the Sounds of Summer tour is no different: Iration, J Boog and The Movement are part of this year’s musical entourage. I caught one of the jam-packed nights of upbeat tunes at Wolf Trap National Park’s Filene Center just outside of Washington, D.C. on a Saturday back in June. The sun was out and the vibe was right as Slightly Stoopid topped off the evening with a smooth and psychedelic set, which included a cover of Grateful Dead’s “Franklin’s Tower” and rousing renditions of “Closer to the Sun” and “Prophet.” 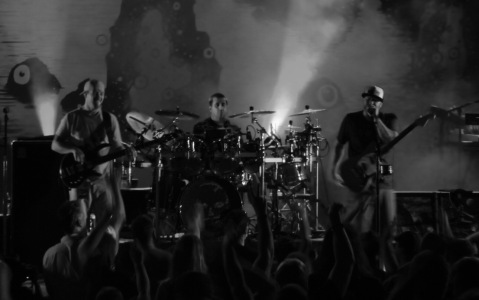 I had the opportunity to chat with Guitarist / Bassist / Singer Miles Doughty before they performed at Wolf Trap. The conversation bounced all over the seven kingdoms as we chatted about the Sounds of Summer tour, Brad Nowell of Sublime, the band’s Punk roots, Star Wars’ Obi-Wan-Kenobi, the Grateful Dead’s Bob Weir, the jam band scene, and you guessed it, Game of Thrones.

Grab your Reyn Spooner and shades and go check out Slightly Stoopid this summer!

MS: The past few years, Slightly Stoopid has been giving a lot of newer bands some major exposure by bringing them as support on the road, including this summer with J. Boog, Iration and the Movement.  Do you guys feel like ambassadors for the Southern California style of Reggae Rock, much like how Bradley Nowell of Sublime may have been for you when you all were starting up?

MD: I think it’s the same thing that Sublime did for Stoopid back when we were 16 years old and Brad & Miguel [Happoldt, co-founder of Skunk Records] gave us an opportunity to make a record in their studio when we were kids. We’re kind of like the only band really with that direct lineage to Sublime from back in the day. And we’re a lot older than some of these bands, so it’s been cool that we’ve been able to go on tour with them and be like big brother for all of the group.

But it’s been a blessing though and we’ve been really lucky to do what we do. And it all stems from that initial meeting with Brad and Miguel and getting our foot in the door with Skunk Records back in the day. And taking their advice of always wanting to tour, and to not be scared to play anywhere. We’ve just always taken that route, stayed on the road and try to bring a full package every year and something fresh that is cool for all of the Stoopidheads and fans that are out there.

I actually spoke to another up-and-coming So-Cal Reggae group I know you guys have worked with, Tunnel Vision. Seems like another case of you guys bringing a band under your wing and giving them an opportunity to fly which is cool.

Yeah, they are good kids. What is good about those guys is they are really hard workers. They are down to get out there and just grind, grind, and grind and make it happen.

And, you know, that is really important and especially given the way music is today. You need to build that grassroots fan base so you can have that core group of fans forever. You know, we have fans that have kind of grown up with the band because there’s been non-stop touring, and it’s pretty special.

It seems like that is the principle you guys have stuck to from the beginning and it is a formula that has worked and is being used by a ton of bands now. The days of record sales carrying your weight are gone, so it is touring that keeps these bands afloat, at least a lot of them.

Oh for sure, there used to not be very many of these summer tours going out, but now there’s a grip of them during the summertime to go see. 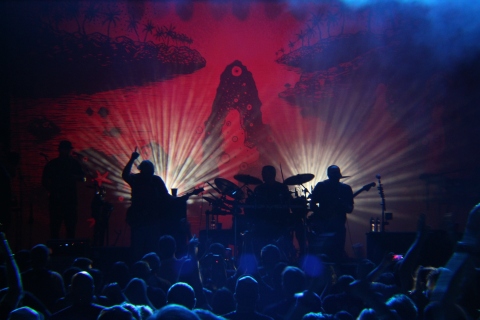 Slightly Stoopid has established yourselves as very well-respected band amongst the ‘Jam Band’ community, including playing festivals like LOCKN’ and working with the likes of Bob Weir at his studios.

Do you feel some kinship with that musical scene and would you say the band’s live sound has incorporated more instrumentation over the years? It seems like you guys have felt more comfortable letting songs breathe in a live setting.

Yeah, I think more that the band has evolved into more than what we were growing up. We’ve done so many of those jam festivals, playing with like Widespread Panic and Bob Weir and guys like that. The Stoopidheads are a lot like the Deadheads, you know what I mean? There are lot of similarities. And when you go into those festivals, in the Jam band circuit, it fits in well. Just because everything else are these long, long, long jam and instrumental solo madness going on the whole day and then we have a little bit of something different, even though we’ll break into that style. We have something different to shake it up a little bit and bring that Southern California culture to all those people as well.

Going back to that session you guys played with Bob Weir. I know the first session was released, Live at Tri Studios, and it is excellent. Do you have any intention of releasing that second session?

Yeah, we have released some of the tracks but we just haven’t figured out when we want to release the whole thing. It is just kind of a timing thing. I am pretty sure we are working on getting it done.

You guys stay true to your punk roots, is that a conscious decision or does it just naturally in live shows? Definitely a change of pace in the set but it keeps the audience on their toes.

I mean we’re punk rockers at heart, you know we started as a punk band. And sometimes it is just good to throw the audience a curveball. When we’re playing some of those bigger shows, we don’t really want to play tons of punk anymore. But we still love to throw some in there because it literally makes people stop and go, ‘Holy shit! It is going down now!’ It’s a game changer bro! (laughs) No, it’s a lot of fun and definitely lets us get out a lot of aggression, too.

I know you guys are big Star Wars fans, last year’s tour was called Return of the Red Eye and the band plays the “Cantina Song” from time to time.

If Slightly Stoopid had to be Star Wars character who would it be and why?

Damn, that’s tough to say. I’d like to be two different people. I’d be Hans Solo, because he’s pretty much the coolest cat in the galaxy. He’s smart, even though he’s always in trouble, he always seems to get his way out of it.

And… Obi-Wan-Kenobi. The jedi, he was great. The only good thing about those prequels was Ewan McGregor saved those movies.

For sure. And I absolutely agree on Hans Solo. I think he made the movies great, some comic relief but very astute and charismatic. Very Slightly Stoopid. Great answer!

Anything you guys look forward to doing when you make it to the East Coast on tour?

When we were in Baltimore at Pier Six Pavilion and right on the water, there were some great seafood spots around there. That place is great, the people are great and the energy is so killer. We always look forward to playing there. That was a great way to start the tour, that was our first show of the tour.  It really was a blast and that is one of my favorite spots.

Let’s end it on a fun one. You guys watching anything cool on Netflix right now on the tour bus?

I really like the show Peaky Blinders, not sure if you are hip to that or not. It has got this guy Cillian Murphy and it is a killer show on Netflix. That is the main show I watch on Netflix, that show is epic. Have you seen Vikings?

I have seen a few episodes and it is very cool. Seems to be in the same stratosphere as Game of Thrones, which I love too.

Yeah, Vikings is dope it is one of my favorite shows. Game of Thrones is me and my wife’s show to watch. It is kind of nice when you can find something that you both like to watch (laughs).

Game of Thrones is cool because it has got all the medieval action intermixed with almost a Soap opera-y, dramatic storyline so people that don’t like the gore can get pulled into it. So it’s perfect. Yeah, my girlfriend and I are the same way and on Sunday night it is our thing.

Yeah dude! It is such a great show. The acting in it is great and the storylines are insane. I do feel like they are ending the show too fast. There were three seasons with so much character buildup of things, but now it has been on this crazy downhill ride for the last two seasons where everything is so quick. Every scene is just, like two minutes.. Next scene! Two minutes.. next scene!

It does feel like they are trying to fill it out quickly, looking forward to this next season AND catching you guys on the road. Should be a fun summer – good luck with the tour!

Alright brother, I appreciate the time!