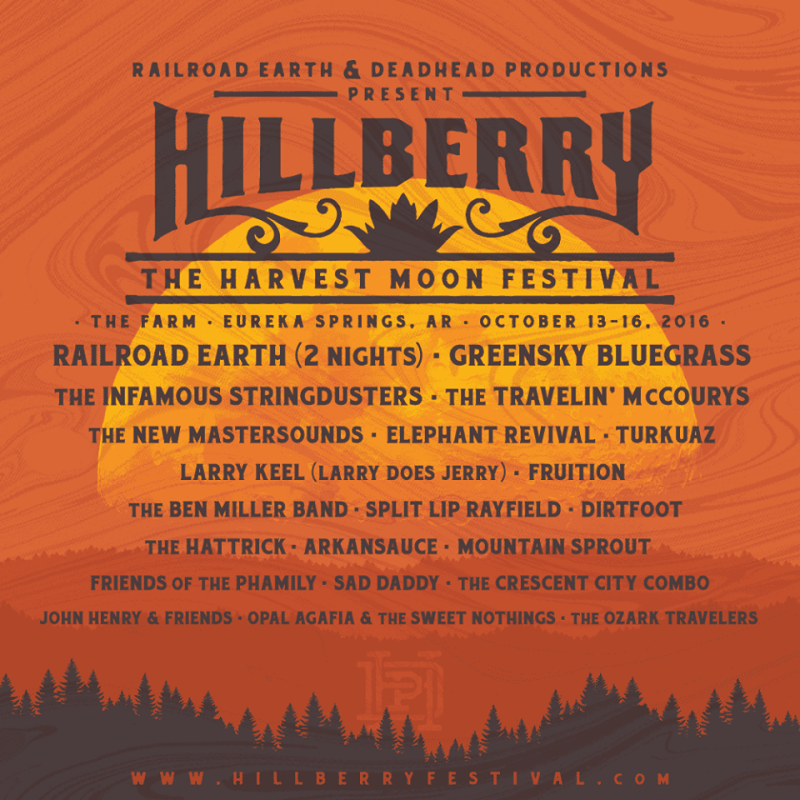 Today, Hillberry: The Harvest Moon Festival announces an additional 12 artists to join the already incredible lineup for the 2nd annual festival taking place October 13-16, 2016 in Eureka Springs, Arkansas. Joining previously announced headliners Railroad Earth (2 nights), Greensky Bluegrass, The Infamous Stringdusters and The Travelin’ McCoureys on “The Farm” is Elephant Revival, The Ben Miller Band, Split Lip Rayfield, The Hattrick, Arkansauce and more. The full lineup is listed below and tickets are on sale now at www.hillberryfestival.com.

Hillberry: The Harvest Moon Festival launched spontaneously in 2015 and has already emerged as the premier jamgrass event in the region. Hosted in the heart of the Ozark Mountains on the stunning DHP property known as “The Farm,” the region has a rich history with bluegrass music, and Hillberry honors this past while ushering in this continually unfolding story of music, mountains, and community. With attendance capped at 3000, attendees can expect a truly intimate festival and camping experience.  In addition to performances by over 20 artists, Hillberry’s campfire and campsite jams, both planned and spontaneous, are sure to to become festival legend. Beyond the music, Hillberry offers art installations, a wide spectrum of activities and workshops for children and adults alike, including tie-dying, yoga, rock balancing, and open forum discussions with headlining performers, and much more.

The Farm itself is a sight to behold. Boasting 360° panoramic views in the hills of the Ozarks, The Farm is the perfect setting for a fall festival that is bound to be both colorful and whimsical all at once. The 160 acre property features diverse camping opportunities including a mainstage camping area, a hillside camping area with spectacular views of the entire venue, a family camping area, and a wooded camping area that is drop off only (no car camping), the perfect choice for the hammock camper or anyone wanting more isolated camping without a long trek to get to the stage area. Hillberry will also offer a Festi-Cab service to cart attendees whose feet are weary from dancing all day and night.

A general store is onsite and offers an array of necessities including food, non-alcoholic beverages, ice, and camping supplies. Hillberry will host a multitude of food vendors to appeal to any taste. There will also be beverage vendors offering organic juices and a café serving coffee. Attendees will find an assortment of unique arts, crafts, and official merchandise to take home as mementos.

Finally, no visit to The Farm is complete without a brief hike to the top of the venue to a shrine constructed in memory of the late Jerry Garcia of the Grateful Dead. A Eureka Springs based artist, known as ‘Ralph Shrine,’ and his team built the “Jerry Shrine” to commemorate one of the most inspiring musical artists of the 20th century; an artist whose band and musical legacy left an impact on literally hundreds of thousands of loyal fans that still resonates today. Visitors are encouraged to leave something at the Jerry Shrine, as it is a living work of art, continually changing over time, as do all things in this wondrous spectrum of life.

Friends of the Phamily