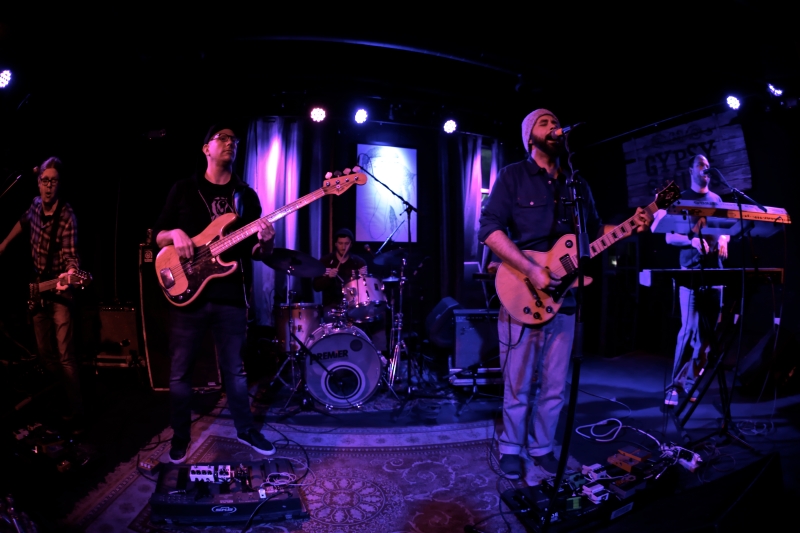 We recently spoke with Jamie Newitt of Florida rock outfit,The Heavy Pets. Jamie has been with the band since 2008 performing at concerts and festivals across the country. This weekend the band will be performing at Sweetwater 420 Festival Official Afterparty at Aisle 5 in Atlanta (Tickets & Info). Jamie discusses the special Walrus – A Beatles Tribute, teaching drums when he’s not on the road, festival & show highlights, plans for 2016, bands he’s currently listening to and much more.

You’ll be performing a tribute to the Beatles at Aisle 5 after Sweetwater 420 Fest this weekend. When did the music of the Beatles enter your life?

The Beatles have been a part of my life since I was born. One of my earliest memories is my Mom playing “In My Life” on the piano. She was a middle school teacher for like 20 years. She obviously loved the Beatles and would play Beatles stuff on the piano at home. She made it a point to teach the Beatle’s music to her students at school. I always remember the time of the year when it was time for her to teach the kids about the Beatles. She would actually play records for the kids. Both my parents are huge Beatles fans. My Dad is actually an artist. When he was in college he had this infamous apartment that he painted, from ceiling to floor, as the yellow submarine. You would walk into the apartment and it was like you were walking into the yellow submarine. I always heard so many stories about that from him and his friends and other people that went to that college. It was an infamous apartment that people would come and check out. This was in the late 60’s early 70’s. I’ve been connected with that music for as long as I can remember. 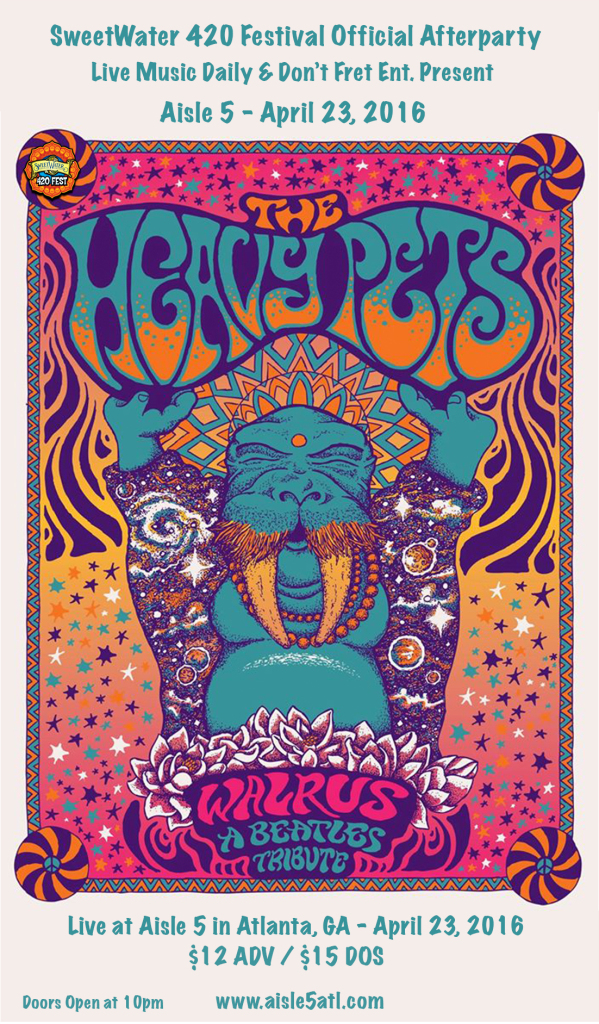 How did the idea to do an entire tribute to the Beatles come to fruition?

The Beatles thing started as an anniversary present to our South Florida fans. We had a ten-year anniversary last year. The Heavy Pets turned 10. We were thinking about what we could do for a ten-year anniversary show and one of the ideas that we came up with, I’m pretty sure it was Mike’s idea, was to do a set of the Beatles as kind of a gift to our South Florida fans. We really don’t play too many covers, or haven’t up until this point, and we definitely never did a tribute thing like that. It was a pretty cool undertaking and the reception was huge. People really liked it. We thought it was going to be a one-time thing, but there was a lot of interest in it and people were digging the recordings. We’ve probably done six or seven of these Beatle’s tributes. We’re doing it a couple festivals this summer. We did it in Philly and at the Brooklyn Bowl.

While your sound is mainly rock based, The Pet’s sound definitely has a Florida element to the music, some of this shines in reggae based passages within the context of extended longer songs as well as the whole song itself (such as John Galt). What’s your favorite part about playing reggae music (one drop rhythm or otherwise)?

It’s something that’s a part of our sound for sure, foundationally, in a lot of the material. I’m still trying to learn how to legitimately play reggae music, personally. Reggae is such a beautiful style of music and I’ve always really dug it. It’s a lot of fun to play. It’s funny too because on the surface sometimes it’s viewed as kind of like “easy” or really simple music, but it’s super deep man. Achieving the right feel is the most important thing. It’s tough, it’s not easy to do. There’s so much nuance to it. People play just reggae music their entire lives. Those are the masters that I’ve tried to learn from. Especially from the drums perspective, there are so many different feels and styles of the “reggae umbrella.” A lot of them are very different. There’s so much to learn there and it’s so much fun. It’s repetitive with the drums, but it also changes subtly and it’s super organic. Especially with drums specifically, there’s a lot of focus on different styles. People get into the Latin thing, the Afro-Cuban and Brazilian. There are so many different little ways to play all these different grooves that are like a little mini style unto themselves. It’s really fun to play basically.

What’s your favorite part about teaching music? What do you really like getting out of it?

Seeing somebody progress and helping them along is really something that I enjoy. I have a few adults that I teach, but it’s mostly kids. It’s seeing the enjoyment and making that connection and really kind of helping them see how cool music is and how cool the drums are. Having that kind of transfer to them. Connecting on that level is really cool and seeing kids progress and kind of fall in love with music and the instrument. It’s been pretty awesome.

You’ve been playing in this band since 2008. You’ve toured across the country and played some really cool gigs of all sizes. You’ve met all different types of people. What have been some of your favorite moments as a group at some of these concerts and festivals? What are some of the moments, out of the hundreds of shows, that kind of stick out?

The AURA set we did was pretty special. The feeling on stage during that was amazing. I got to do a drum break with Mike Dillon that wasn’t planned which was super cool. That was pretty much what dreams are made of. That kind of had us floating on cloud nine. There are a lot of notable sit-ins that have happened. We’ve Eric Krasno sit in a couple times with us. That’s been ridiculous. He’s one of my favorites. We got to do a whole gig with Steve Kimock.He was just guesting with us throughout the whole show at the Stir Fry Music Festival a couple years back. That was pretty rad. He was just on the set with us using his ears and playing perfectly without knowing any of the songs. We had G. Love sit in with us too which was pretty awesome. We did the Rombello music cruise. G Love got up and kicked a free style and did some harmonica playing which was pretty rad. He was front row raging our set too which was pretty awesome. We got to do Jam Cruise. That was pretty much the best ever experience just hanging and playing with a lot of those guys that are usually on that boat. We did Bonnaroo awhile ago which was pretty surreal. There’s a lot of really great moments for sure.

What are you plans for 2016 and beyond? Are you guys looking at getting back in the studio at all? Are there any cities, festivals or venues that guys want to get to?

We really want to get back in the studio and get working on maybe a full length record. We’re talking about doing that by the end of this year or early next year. We all have a lot of material that is just sitting there waiting to be laid down. That’s definitely in the future. The High Sierra Music Festival is a really cool festival. We got to do that once a long time ago. The vibe of that place is really cool. That’s the only west coast festival we’ve done. It definitely has a different vibe than any other festival I’ve been to so it would be awesome to get back to that one. We’ve always really wanted to check out the Hangout. It seems so cool. That’s definitely one that’s on the radar for sure.

What are your favorite new bands in the jam scene and even outside the jam scene? What do you like about them?

There are so many killer bands that are newer. It’s so awesome. I really dig the Main Squeeze. Every time I see them they are straight killing it. Their set at AURA this year just blew my mind. It was so good. They’re so high energy and air tight. The tunes are really cool and super funky. Everybody in the band can play. I really love The Nth Power. Those guys are really inspirational to me and all the Pets guys. The soulfulness and the depth of their music is really special. It grooves so hard and there’s just so much to love about that band. Their tunes are really well done. I really like the Naughty Professor from New Orleans. Those guys are really cool because they’re definitely coming on the more modern jazz side of it with the songs that they write. I really like the jazz/funk style and their tunes are really cool. I’ve always loved Dopapod. I don’t know if you consider them a new band on the scene or not. We’ve been doing stuff with those guys for a long time. I just like their sound and their style. Whenever you hear them you know it’s them immediately. They have this unique sound that’s 100% Dopapod. Their songs can be fun, they can be dark and they can be quirky. Turkuaz is another band that just slays it. 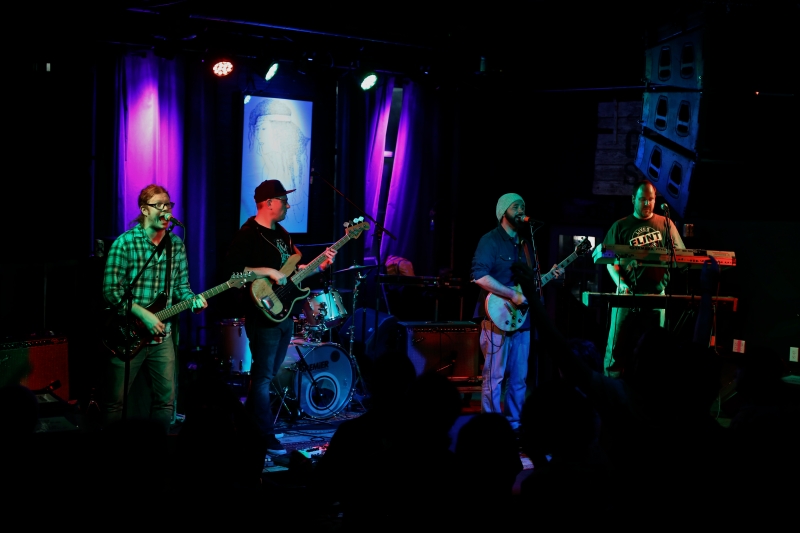 What are some bands that people might not think you would listen to?

I listen to a lot different styles of music. There’s a band called Hiatus Kaiyote that I really like. They describe themselves as “future soul” which I think is kind of a cool description. It’s incredibly soulful and it’s very avant-garde, but its still grooves super hard. It’s really kind of experimental and authentic. I’ve really been loving those guys for sure. There’s a drummer named Mark Guiliana. He’s in the jazz scene, but he also does this really cool experimental live electronic music. He’s the kind of guy that you can find on one record where it will be kind of like a jazz thing and then you’ll find him on another record that’s super electronic or even hip-hopish. His own group or project is called Beat Music which is really cool stuff to check out. I’ve always been a huge Jamiroquai nerd. I’ve loved that band forever. The Roots are probably one of my biggest influences. I just grew up listening to Quest Love and those guys.

We’re really excited about the show on 4/23 at Aisle 5? Have you guys ever played there before?

We’ve done a bunch of stuff there. We did a Phish after show there one time and that was ridiculous. It was a sold out deal. We’ve played there a couple times since they changed the venue around and it’s always been a great time. I’m pretty confident it’s going to be a rager.