Album Review – Half A Man 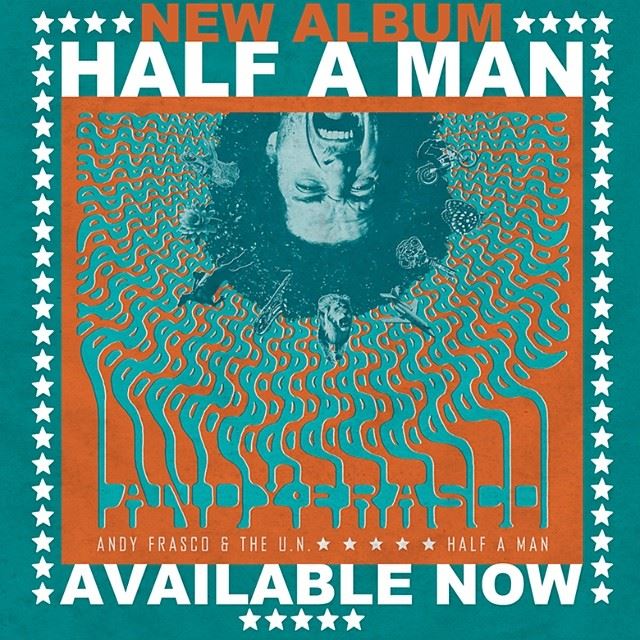 Andy Frasco is a rarity in the music business. Besides his time as a keyboardist touring almost every state and at least six different countries, Frasco began his career managing and promoting bands when he was just 16 years old. And what’s more, Frasco never even touched a keyboard until he was 17! He must have picked it up pretty quickly because he was already recording his first album and touring the country with VH1’s Save the Music Foundation by age 19. Three albums and a couple hundred thousand miles of touring later, Andy Frasco has released his best work to date, Half A Man, marking the first release on his brand new label Fun Machine Records.

Frasco calls his band The U.N. because it is constantly changing lineups, although he has a few regulars. For Half A Man, he enlisted the Kris Lager Band (Kris Lager, Jeremiah Weir, Brandon Miller and John Fairchild), Leslie Page, Sammy Avila, Joel Eckels, and U.N. regulars Ernie Chang, Shawn Eckels, Supaman and Andee Avila. Although Frasco had his hand in writing all of the songs except one, many of the U.N. members, and a couple of outside songwriters, contributed as well.

“Sunny Day Soldier” starts off the album with a beautiful message, which basically says “It’s good to be alive!” What a great way to start out an album, since that’s what music is all about, celebrating life. The tune has a gospel and soul feel. A jazzy sax solo and slick guitar solo add plenty of flavor to the song. “Shakin’ Ain’t A Crime” is a faster-paced, swing blues track and is about, to put it simply, women. The most defining lyrics say, “If you know how to move, I’m addicted to your groove.” A rockin’ guitar solo keeps the energy high, and the band shows strong control over dynamics with a softer portion of the tune. “Main Squeeze” is a bouncy pop tune with gospel-like background vocals in the chorus. The whole band provides tight instrumentation, with sharp staccato hits to lead into new verses, which lays groundwork for a screaming sax solo.

“Smoking Dope n’ Rock n’ Roll” really cuts to the core of the album, and I believe it could be applied to the lives of many people, especially other musicians. Written by Shawn and Joel Eckels, the tune begins with an acoustic, bluesy rock intro. The lyrics sing, “Smokin’ dope n’ rock n’ roll/Only life I’ve ever known” and “Just because I take the time to unwind/Doesn’t make me half a man.” I am sure many people can relate to these statements. “Pay to See You Smile” starts off with a wailing sax intro and shredding guitar solo, before Frasco growls out the chorus of this raunchy track. “Commitment Deficit Disorder” provides a funky jazz fusion groove. Highlights include a funky bass breakdown and howling sax solo. This song is about exactly what the title says. Frasco has creatively named this tune with a twist of the term “commitment issues.” “Don’t Ya Worry” has a happy, laid back feel to it. The lyrics tell the world that there will of course be tough times in our lives, but we have to rise up and stay positive.

“Stop Fucking Around” is a fun, lighthearted tune, apologizing to a woman and telling her the singer will get his act together (we have all been there!). A well-phrased sax solo takes over the bridge. “Struggle” picks up the pace for an intense tune that will ring in your head for days. This track relates to the struggle of keeping a relationship alive when one of the people involved is always on the move (presumably alluding to life on the road as a musician, a theme that Frasco frequently writes about). “What Would I Do” incorporates a little country twang. A short tune, this song is a tribute to a woman, singing “What would I do without you baby?” “All of My Friends” is another track about a common scenario in today’s world. Many of us feel like everyone around us is growing up, getting jobs, getting married, etc. This tune accurately captures the somewhat melancholy mood these realizations can evoke.

Half A Man turned out to be a great project for the first release of Fun Machine Records. Frasco has seriously stepped up his songwriting, and he enlisted some fine musicians to help complete this album. Most of Frasco’s lyrics tend to be pretty straightforward. There is not much wordplay, metaphors, analogies, etc. He gets straight to the point, but the content, choice of lyrics and Frasco’s unmistakable sense of humor keep the tunes relatable and intriguing. Also, from the way he growls out his vocals to the masterful musicianship and instrumentations, it is impossible not to recognize how much fun these guys had recording this project. The whole album represents what making music is all about: celebrating life, releasing and evoking emotions and having fun while you do it. Half A Man was released on June 3, 2014.